…Just the wrong kind of record. At just 250,000, this was the lowest annualized new home sales number ever. So on one hand you have a TV clown tell you the housing market bottomed in August 2008, on the other you have a pathological tax cheat Welcoming all to the Recovery, and on the mutated third hand (thank you Fukushima), reality continues to indicate that the biggest depression in history persists without abating. 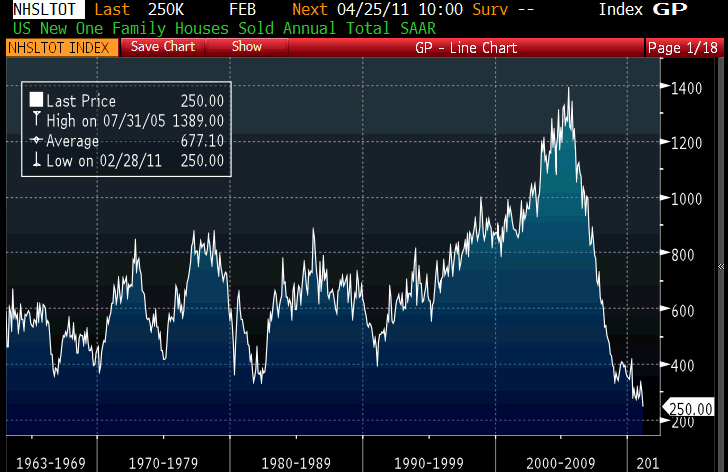 Mar. 23 (Bloomberg) — Purchases of new U.S. homes unexpectedly declined in February to the slowest pace on record and prices dropped to the lowest level since December 2003, adding to evidence the industry is floundering.

Sales decreased 16.9 percent to a 250,000 annual pace, figures from the Commerce Department showed today in Washington. Economists surveyed by Bloomberg News projected a gain to a 290,000 rate, according to the median estimate. The median price fell 8.9 percent from the same month in 2010.

Builders are struggling to compete with existing homes as foreclosures add to the overhang of unsold properties and drive down values. The figures underscore the Federal Reserve’s view that the housing market “continues to be depressed” even as the rest of the economy improves.

“We’ve got this tug of war going on where we’ve got this very weak housing sector and a manufacturing sector that’s doing fine,” said Brian Jones, an economist at Societe Generale in New York, whose 240,000 forecast was the lowest in the Bloomberg survey. “The new and existing home sales numbers were abysmal. You could say that part of it was attributable to unusually harsh weather.”

Previously owned home purchases dropped 9.6 percent in February, figures from the National Association of Realtors showed two days ago. The median home price fell to a 9-year-low, while the supply of unsold properties rose.

Stocks rose as higher metal prices lifted shares of commodity producers. The Standard & Poor’s 500 Index climbed 0.3 percent to 1,297.54 at the 4 p.m. close in New York. The yield on the benchmark 10-year note was little changed at 3.33 percent.

The Commerce Department revised January purchases up to 301,000 from a previously reported 284,000 rate. Purchases in February declined to record lows in three of the four U.S. regions. Sales slumped 57 percent in the Northeast, 28 percent in the Midwest and 15 percent in the West. The South showed a 6.3 percent decrease.

The supply of homes at the current sales rate rose to 8.9 month’s worth from 7.4 months in January. There were 186,000 new houses on the market at the end of February, the same as a month earlier.
More Timely

New-home sales are considered a more timely barometer than purchases of previously owned homes, which account for about 90 percent of the housing market. Existing-home purchases are calculated when a contract closes.

The number of homes in foreclosure rose to a record 2.2 million in January, according to Lender Processing Services Inc. in Jacksonville, Florida. About 23 percent of homeowners with mortgages had negative equity in the fourth quarter, meaning their home-loan balances were higher than the value of their properties, CoreLogic Inc., a research company in Santa Ana, California, said in a March 8 report.
Hovnanian Homes

Hovnanian Enterprises Inc. (HOV), the largest homebuilder in New Jersey, reported on March 1 a first-quarter loss after a drop in sales and the absence of a tax benefit that boosted results a year earlier. The loss was $64.1 million, or 82 cents a share, for the quarter ended Jan. 31, the Red Bank-based company said in a statement.

“We need confidence to go up,” Chief Executive Officer Ara Hovnanian said March 2 during a call with analysts. “We need employment numbers to get better, and I think that’ll attract traffic as well as customers.”

While signs such as stronger manufacturing and exports indicate the world’s largest economy is gaining momentum, Fed Chairman Ben S. Bernanke and his fellow policy makers reaffirmed plans to buy $600 billion of Treasuries through June to “promote a stronger recovery” after their second meeting of the year on March 15.

Bernanke told Congress during a March 2 testimony that until more people want homes, “there’s no demand for construction to build houses and so the construction industry is quite reduced.”