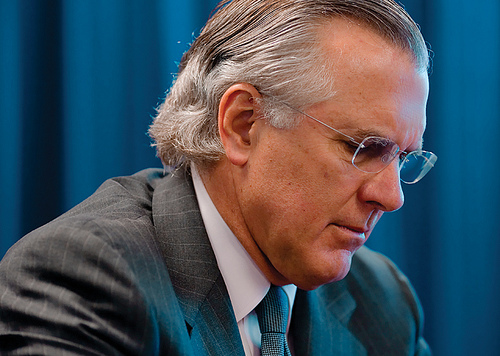 The United States is on a fiscal path towards insolvency and policymakers are at a “tipping point,” a Federal Reserve official said on Tuesday.

“If we continue down on the path on which the fiscal authorities put us, we will become insolvent, the question is when,” Dallas Federal Reserve Bank President Richard Fisher said in a question and answer session after delivering a speech at the University of Frankfurt. “The short-term negotiations are very important, I look at this as a tipping point.”

But he added he was confident in the Americans’ ability to take the right decisions and said the country would avoid insolvency.

“I think we are at the beginning of the process and it’s going to be very painful,” he added.

Fisher earlier said the US economic recovery is gathering momentum, adding that he personally was extremely vigilant on inflation pressures.

“We are all mindful of this phenomenon. Speaking personally, I am concerned and I am going to be extremely vigilant on that front,” Fisher said in an interview with CNBC.

Fisher also said that the U.S. Federal Reserve had ways to tighten its monetary policy other than interest rates, including by selling Treasurys, changing reserves levels and using time deposits.

He added that he does not support the Fed embarking on an additional round of quantitative easing.

“Barring some extraordinary circumstance I cannot forsee…I would vote against a QE3,” Fisher told CNBC. “I don’t think it’s necessary. Again, we have a self-sustaining recovery.”

–Annette Weisbach contributed to this story.