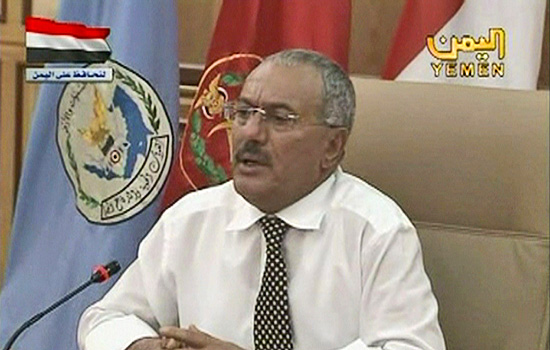 In his first public comments since a wave of defections by senior military officers, Yemen’s embattled President refused to step down in a defiant television address to the nation yesterday and warned of a protracted and bloody civil war.

More than a dozen of Yemen’s military commanders, including the country’s top general, have abandoned President Ali Abdullah Saleh and pledged their support for youth protesters calling for an end to his 32-year rule. With tanks from both sides on the streets of the capital Sana’a, negotiators last night managed to prevent the first shots being fired between rival forces that could descend into civil war, according to government officials.

SANAA, March 22 (Xinhua) — Yemeni opposition coalition on Tuesday reaffirmed its refusal to President Ali Abdullah Saleh’s fresh offer that he will step down after moving power to parliament, insisting on his immediate leave.

President Ali Abdullah Saleh has been a key U.S. ally in a turbulent region. If he steps down, Yemen may become a terrorist haven and a proxy battleground for Saudi Arabia and Iran.

Yemen’s president has fired his entire cabinet amid escalating protests demanding his resignation. The announcement by President Ali Abdullah Saleh came after tens of thousands of mournersflooded the streets of the Yemeni capitalon Sunday in a mass funeral for 52 protesters killed on Friday in a sniper attack by government loyalists.

The president’s office issued a statement saying he was firing his cabinet, although Yemen’s official news agency reported he had asked them to remain in place until a new one could be appointed.