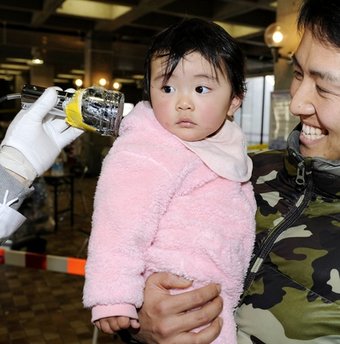 TOKYO – The government said Saturday that small but safe amounts of radioactive iodine turned up in tap water in Tokyo and five other areas, amid concerns about radiation leaking from a damaged nuclear power plant.

The trace amounts were found in Tokyo and the other prefectures on Friday, the first day since the government ordered nationwide daily sampling due to the nuclear crisis at the Fukushima Dai-ichi nuclear plant, the Ministry of Education, Culture, Sports, Science and Technology said.

A ministry statement said the amounts found did not exceed government safety limits. But tests on water, which for decades were only done once a year, usually show no iodine.

The highest reading was less than a third of the allowable limit. A ministry official, who could not be quoted by name as is customary, said the government deems the small amounts safe and was awaiting further expert analysis.

“The figure is still below the national limit and safe,” said Masayuki Kubo, an environmental protection official at Tochigi prefecture, where the highest tap water reading was found. “You can drink it safely without limiting the amount of water you take.”

Nuclear reactors at the Fukushima plant began leaking radiation in the days after the March 11 earthquake and tsunami knocked out its cooling systems. The crisis has raised public alarm about the threat to public heath, and earlier Saturday, the government acknowledged that tests found iodine in spinach and iodine and the radioactive element cesium in milk from some farms 20 to 75 miles (30 to 120 kilometers) from Fukushima.

The areas where iodine turned up in the tap water are well to the west and south of the nuclear plant.