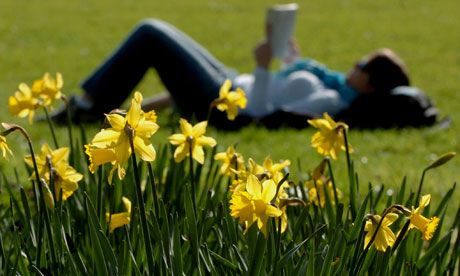 Daffodils blooming in early spring sunshine. Jane Errington is unhappy that police were dispatched after her young daughters picked some of the flowers in a public park. Photograph: Chris Radburn/PA

Police rushed a pair of officers in a marked car to a park after two young sisters were spotted picking daffodils.

A member of the public reported them to police and two constables attended and advised the girls’ mother, Jane Errington, that she and her partner, Marc Marengo, could be arrested for criminal damage.

The couple expressed anger at the “heavy-handed” response and accused police of wasting time.

Errington said the officers watched the family for 20 minutes before speaking to them. She said Sienna had been left too upset to return to the public park, fearing being “taken away by the police”.

The family had been enjoying the spring sunshine with a walk through Whitecliff Park on Sunday when the girls broke off and started to pick daffodils.

Errington, who owns a property maintenance business, said: “The little ones had been riding their bikes but after a while they got bored and went to play in the daffodils.

“I didn’t see them pick any flowers, but the next thing we knew a police patrol car pulled up and the officers in it started watching us.

“We didn’t know what was going on and after about 20 minutes my partner started feeling very uncomfortable.

“Two male police officers then came up to us, saying they’d had a report of flowers being ripped up. They said we had committed a crime.

“The little ones were really upset and started crying. It was quite frightening for them. They did have daffodils in their hands – I’d say about 20 between them – and they had been picking them up and sorting them out like children do.

“If we’d seen it, we would have stopped them, but all it needed was for whoever complained to have approached us and made us aware.

“I had to explain to them that the police are friendly and it was just a mistake. I explained to them that the flowers were there for everybody and that in the future we will leave them there.

“I just felt it was unnecessary and upsetting. Surely the police have better ways to spend their time and taxpayers’ money?”

Whitecliff Park is owned by the council and therefore removing property from it is an offence.

A relative of Poole Conservative councillor Peter Adams called the police. Adams said: “The children weren’t just taking one or two daffodils, it was big clumps of them.

“I was surprised that the police sent a squad car with two PCs. I would have expected a PCSO [a police community support officer] to turn up and have a quiet word with them.”

A spokesman for Dorset police said: “We were told a significant amount of daffodils were being pulled out and thrown around.

“Two police constables attended, spoke to the mother of the children and explained that as the flowers were laid by the council for the enjoyment of all, that people were not allowed to pick them.

“The officers had to advise her that by law it was criminal damage, in case they were not aware.”