However, many of those reactors have been negligently sited on active faults, particularly in the subduction zone along the Pacific coast, where major earthquakes of magnitude 7-8 or more on the Richter scale occur frequently.

The periodicity of major earthquakes in Japan is less than 10 years. There is almost no geologic setting in the world more dangerous for nuclear power than Japan — the third-ranked country in the world for nuclear reactors.

Japan was warned more than two years ago by the international nuclear watchdog that its nuclear power plants were not capable of withstanding powerful earthquakes, leaked diplomatic cables reveal. 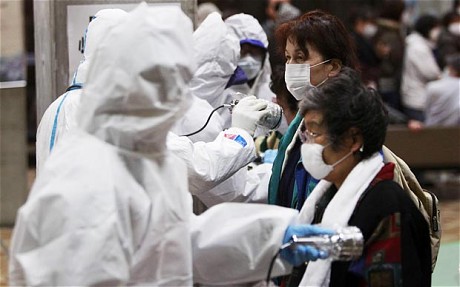 An official from the International Atomic Energy Agency (IAEA) said in December 2008 that safety rules were out of date and strong earthquakes would pose a “serious problem” for nuclear power stations.

The Japanese government pledged to upgrade safety at all of its nuclear plants, but will now face inevitable questions over whether it did enough.

While it responded to the warnings by building an emergency response centre at the Fukushima plant, it was only designed to withstand magnitude 7.0 tremors. Friday’s devastating earthquake was a magnitude 9.0 shock.

The news is likely to put further pressure on Japan’s Prime Minister, Naoto Kan, who has been criticised for “dithering” over the country’s response to the ongoing crisis at the Fukushima nuclear power plant.

Panic started to spread throughout Japan yesterday following the news that a third explosion at the plant might have damaged the protective casing around the reactor core, increasing the threat of radioactive leaks.

The government was considering using helicopters to spray water over the Fukushima site to limit the spread of radioactive particles as part of its increasingly desperate attempts to keep the situation under control.

Meanwhile the FTSE-100 share index fell by 1.4 per cent as stock markets around the world slumped in response to a 10.6 per cent drop in Japan’s Nikkei index.

Warnings about the safety of nuclear power plants in Japan, one of the most seismologically active countries in the world, were raised during a meeting of the G8’s Nuclear Safety and Security Group in Tokyo in 2008.

A US embassy cable obtained by the WikiLeaks website and seen by The Daily Telegraph quoted an unnamed expert who expressed concern that guidance on how to protect nuclear power stations from earthquakes had only been updated three times in the past 35 years.

The document states: “He [the IAEA official] explained that safety guides for seismic safety have only been revised three times in the last 35 years and that the IAEA is now re-examining them.

“Also, the presenter noted recent earthquakes in some cases have exceeded the design basis for some nuclear plants, and that this is a serious problem that is now driving seismic safety work.”

The cables also disclose how the Japanese government opposed a court order to shut down another nuclear power plant in western Japan because of concerns it could not withstand powerful earthquakes.

The court ruled that there was a possibility local people might be exposed to radiation if there was an accident at the plant, which was built to out of date specifications and only to withstand a “6.5 magnitude” earthquake. Last Friday’s earthquake, 81 miles off the shore of Japan, was a magnitude 9.0 tremor.

However, a cable from March 2006 reported that the court’s concerns were not shared by the country’s nuclear safety agency.

It says: “Japan’s Nuclear and Industrial Safety Agency believes the reactor is safe and that all safety analyses were appropriately conducted.”

The Government successfully overturned the ruling in 2009.

Another cable reported to Washington local concerns that a new generation of Japanese power stations that recycle nuclear fuel were jeopardising safety.

The cable, quoting a local newspaper, reports: “There is something precarious about the way all electric power companies are falling in step with each other under the banner of the national policy. We have seen too many cases of cost reduction competition through heightened efficiency jeopardizing safety.”

The cables also disclose how Taro Kono, a high-profile member of Japan’s lower house, told US diplomats in October 2008 that the government was “covering up” nuclear accidents.

He alleged that the government was ignoring alternative forms of energy, such as wind power.

The cable states: “He also accused METI [the Ministry of Economy, Trade, and Industry] of covering up nuclear accidents, and obscuring the true costs and problems associated with the nuclear industry.” He added that the Japan’s “extensive seismic” activity raised safety concerns about storing nuclear material.

Mr Kan was not in office at the time the nuclear warnings were made. He became science and technology minister in 2009 and prime minister in June 2010.