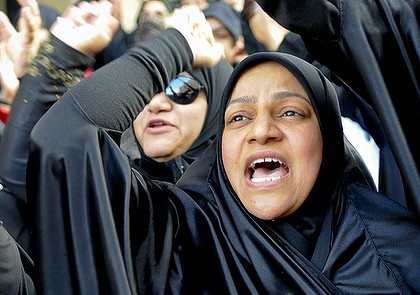 At least 200 people have been shot and wounded in a Shi’ite village south of the Bahraini capital, a medic says, as the king imposed a state of emergency after bringing in Saudi and Emirati troops to help quell anti-regime protests.

As violence escalated, close ally the United States warned that there was “no military solution” to political upheaval in Bahrain and that any violence against peacefully expressed political demands “should be stopped”.

“More than 200 people we received today had been shot with buckshot,” a hospital doctor in the village of Sitra, south of the capital, said.

The doctor, who asked that his name not be used, said the hospital was under siege by armed gangs and security forces targeting Shi’ites – the backbone of anti-regime protests that have raged for a month.

Thousands of protesters marched to the Saudi embassy, chanting slogans against the king and vowing to defend the country from the “occupation” forces, as unrest in the tiny country became a regional diplomatic crisis.

The financial district of Manama – a regional banking hub – was deserted for a third day except for anti-government protesters.

Sunni and Shi’ite vigilantes were on the streets in various parts of the capital and in rural villages.

A Shi’ite protester and a member of the security forces were killed in separate incidents in the south, amid unconfirmed reports of bloody clashes outside the capital.

In Manama, the protesters brandished banners against the king.

They also called for unity between Sunnis and Shi’ites in the mainly Shi’ite country, which has been ruled by a Sunni dynasty for more than 200 years.

Police and foreign forces were nowhere to be seen there, witnesses said.

State television interrupted normal programming to announce a three-month state of emergency in the strategic Gulf state, which is home to the US Fifth Fleet and hosts major international banks and financial institutions.

“The Commander in Chief of the Bahrain Defence Force has been mandated to take the measures and procedures necessary to preserve the safety of the nation and its people,” it said, adding that “other forces” could also be used if necessary.

Armoured troops from Saudi Arabia and the United Arab Emirates had earlier rolled across the causeway from Saudi’s Eastern Province to help Manama tackle pro-democracy protests shaking the kingdom.

Saudi Arabia’s staunchly Sunni government said it had responded to a call for help from its neighbour under a mutual defence pact of the six-country Gulf Cooperation Council (GCC).

But Iran said the military intervention in a Shi’ite-majority country it has historic claims to was unacceptable.

“The people of Bahrain have demands, which are legitimate and are being expressed peacefully,” foreign ministry spokesman Ramin Mehmanparast said in Tehran.

“Any violence in response to these legitimate demands should be stopped.”

Bahrain’s state news agency said the kingdom had decided to “immediately recall” its ambassador in Tehran, as the crisis widened into a broader stand-off between Iran and the Gulf Arab states.

The United States warned Gulf states to respect the rights of the Bahraini people, but said the entry of foreign troops was “not an invasion.”

National Security Council spokesman Tommy Vietor said “we call for calm and restraint on all sides. We are particularly concerned by the increasing reports of provocative acts and sectarian violence by all groups.”

“The use of force and violence from any source will only worsen the situation,” Vietor said in a statement that did not mention key US ally Saudi Arabia but which seemed clearly aimed at Riyadh.

“One thing is clear: there is no military solution to the problems in Bahrain.

“A political solution is necessary and all sides must now work to produce a dialogue that addresses the needs of all of Bahrain’s citizens.”

A US official said visiting Secretary of State Hillary Clinton telephoned Saudi Foreign Minister Prince Saud al-Faisal from Cairo, where she was on the first leg of a North African tour, to express her deep concern about the violence and potential for escalation.

She “urged restraint and stressed that the only durable solution is a credible political process, not a military one,” the official said.

“She stated that all parties must avoid violence and provocation and find a peaceful path forward.”

The European Union urged “utmost restraint” and called on Bahrain’s security forces to respect “fundamental freedoms including the right to assemble freely and peacefully,” a spokeswoman said.

A spokesman for British Prime Minister David Cameron said “governments should respond to calls for change with reform, not repression.”