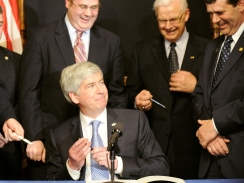 Michigan lawmakers are on the verge of approving a bill that would enable the governor to appoint “emergency managers” — officials with unilateral power to make sweeping changes to cities facing financial troubles.

Under the legislation, the Michigan Messenger reports, the governor could declare a “financial emergency” in towns or school districts. He could then appoint a manager to fire local elected officials, break contracts, seize and sell assets, eliminate services – and even eliminate whole cities or school districts without any public input.

The measure passed in the state Senate this week; the House passed its own version earlier. The two versions of the bill are expected to be reconciled next week, and Republican Gov. Rick Snyder has said he will sign the bill the bill into law.

Democrats and their allies are decrying the legislation as a power grab and say it’s part of a wider effort taking place in several states, such as Wisconsin, to weaken labor unions.

“It takes every decision in a city or school district and puts it in the hands of the manager, from when the streets get plowed to who plows them and how much they are paid,” said Mark Gaffney, president of the Michigan State AFL-CIO. “This is a takeover by the right wing and it’s an assault on democracy like I’ve never seen.”

U.S. Rep. John Conyers, a Democrat who represents Detroit, said in a statement that in a given city, the governor’s new “financial czar” could “force a municipality into bankruptcy, a power that will surely be used to extract further concessions from hardworking public sector workers.”

He said the legislation raises “serious constitutional concerns.” On top of that, he said, allowing an “emergency manager” to dissolve locally elected bodies “implicitly targets minority communities that are disproportionately impacted by the economic downturn, without providing meaningful support for improved economic opportunity.”

The emergency manager, he said, “has to have the backbone, he has to have the power, to null and void a contract.” In response to concerns that local leaders will have to cede control, Brandenburg said, “I’ll tell you what, I think that in a lot of these places there is no control.”

As the “emergency manager” bill nears final passage, state lawmakers are also considering Snyder’s proposed budget, which would cut spending on schools, universities, prisons and communities, according to the Detroit Free Press.

Snyder has also proposed eliminating $1.7 billion in tax breaks for individuals while cutting $1.8 billion in taxes for businesses to spur job growth. Much of the $1.7 billion in new tax revenue would be “coming from retirees, senior citizens and the working poor,” the Free Press wrote in an editorial.