This spring, the United Arab Emirates is expected to close a deal for $7 billion dollars’ worth of American arms. Nearly half of the cash will be spent on Patriot missiles, which cost as much as $5.9 million apiece.

But what makes those eye-popping sums even more shocking is that some of the workers manufacturing parts for those Patriot missiles are prisoners, earning as little as 23 cents an hour. (Credit Justin Rohrlich with the catch.)

The work is done by Unicor,  previously known as Federal Prison Industries. It’s a government-owned corporation, established during the Depression, that employs about 20,000 inmates in 70 prisons to make everything from clothing to office furniture to solar panels to military electronics. 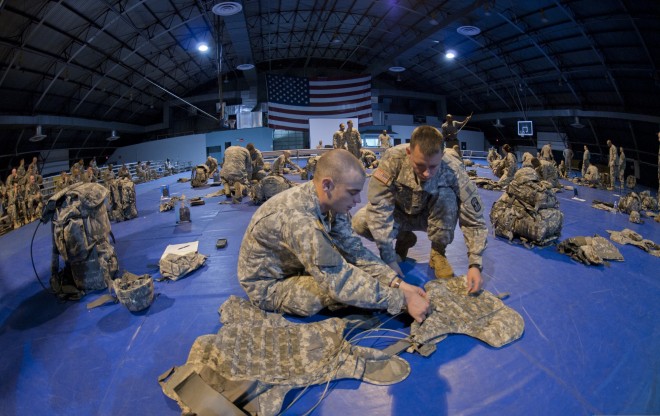 Building parts for Patriot missile systems was just a warm-up, apparently, for a government-owned company that relies on federal inmates making as little as 23 cents an hour. On Wednesday, the U.S. Army announced that it handed Federal Prison Industries a no-bid, nearly $20 million contract to build body armor.

It’s the latest in a decades-long string of military deals for FPI, also known as Unicor. Over the years, the company has supplied parts for F-15 and F-16 fighter jets, the Cobra attack helicopter, and the iconic Patriot interceptor system. (More about that in a second.)

But this deal is particularly odd, because FPI’s track record with protective equipment is, to put it generously, uneven. In May of last year, the Army recalled 44,000 FPI-made protective helmets after they failed ballistic testing. FPI then promptly got out of the helmet business.

That rather serious blemish on FPI’s record hasn’t stopped the Army from going back to the firm for $19,767,468’s worth of bulletproof “Outer Tactical Vests.” According to the Army’s contract announcement, the gear is supposed to be “for Pakistan” — presumably, for the Pakistani military. (Although a State Department told suppliers Wednesday that it wants 1,000 vests in Pakistan, too.)

The vest-making will be done at the federal correctional facility in Yazoo City, Mississippi — one of 70 prisons where inmates make anywhere from $0.23 to $1.15 per hour building everything from clothing to office furniture to solar panels to military electronics.

Exactly which military electronics FPI’s nearly 20,000 prisoners build is a matter of some dispute, however. According to FPI’s website, the company “supplies numerous electronic components and services for guided missiles, including the Patriot Advanced Capability (PAC-3) missile.”

A spokesman for Lockheed Martin, which assembles the missile, calls that “completely false” and insists in an e-mail to Danger Room that “at no time were parts from Unicor EVER used in the PAC-3.” The spokesman, Craig Vanbebber, instead says that Unicor components are only used in the larger Patriot system, like the ignition and control units which ensure that the missiles are actually launched into the sky. That larger system is put together by a separate defense contractor, Raytheon. The missiles themselves are free of prison labor, Vanbebber asserts.

But Eric Piepert, who sells FPI’s electronics to the government, insists that the company is very much involved in missile-making. “We’re not making anything up,” he tells Danger Room. “We make wiring harnesses for the military, this being one of them — the Patriot missile.”

The protective clothing business appears to be an equally integral part of FPI’s inmate-reliant business. The company website advertises five different models of body armor, on sale from $170 to $325 each.