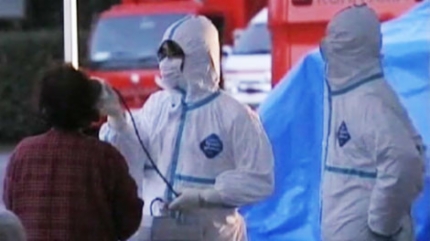 An official scans a man and a child for radiation at an emergency center in Koriyama, Japan, on Monday, March 14, 2011.

THE radiation level at Japan’s troubled nuclear plant in Fukushima Prefecture shot up to 8217 micro sievert per hour temporarily this morning after an explosion was heard at its No.2 reactor, Tokyo Electric Power Co. said.

Kyodo news agency reported the level as of 8.31pm local time was more than eight times the 1000 micro sievert level to which people are usually exposed in one year.

TOKYO – Workers have been evacuated from the number-two reactor at Fukushima No.1 nuclear power plant after it was hit by an explosion Tuesday, a Tokyo Electric Power Co. spokesman said.

A TEPCO spokesman earlier said there was a huge explosion between 6:00 am (2100 GMT Monday) and 6:15 am at the number-two reactor of Fukushima No.1 nuclear power plant.

The government also reported apparent damage to part of the container shielding the same reactor at Fukushima 250 kilometers (155 miles) northeast of Tokyo, although it was unclear whether this resulted from the blast.

UPDATE 11.07am: A THIRD explosion in four days has rocked the earthquake-damaged Fukushima No.1 nuclear plant in Japan.

The blast this morning at Dai-ichi Unit 2 follows two hydrogen explosions at the plant – at Unit 1 and Unit 3 – as authorities struggle to prevent the catastrophic release of radiation in the area devastated by a tsunami.

Water levels have dropped precipitously inside Unit 2, twice leaving the uranium fuel rods completely exposed and raising the threat of a meltdown, hours after a hydrogen explosion tore through the building housing Unit 3.

The latest explosion was heard at 6.10am (8.10am AEDT), a spokesman for the Nuclear Safety Agency said.

The plant’s owner, Tokyo Electric Power (TEPCO), said the explosion occurred near the suppression pool in the reactor’s containment vessel.

(Reuters) – Radiation levels in the air surrounding Japan’s quake-stricken nuclear power plant have risen four-fold after a fresh explosion at the site on Tuesday, the plant operator said.

Authorities at the Fukushima Daiichi complex, damaged in Friday’s massive earthquake and tsunami, are trying to prevent meltdowns in three of the plant’s nuclear reactors.

Japanese authorities say levels would need to reach 1 million or so before causing large-scale radiation sickness.

TOKYO, March 15 (Reuters) – A fresh explosion rocked Japan’s quake-stricken nuclear power complex on Tuesday, around its overheating No.2 reactor, but there was no immediate word of any damage to the reactor itself, the country’s nuclear safety agency said.

Jiji news agency quoted authorities as saying radiation levels around the complex immediately after the blast, the third in as many days, were still relatively low, but it added that some workers had been told to leave the plant.

Authorities at the Fukushima Daiichi complex, damaged in Friday’s massive earthquake and tsunami, are trying to prevent meltdowns in all three of the plant’s nuclear reactors.

“It was a hydrogen explosion. We are still assessing the cause and unsure whether the explosion was caused by damage to the suppression chamber,” an official at the safety agency told Reuters. He did not have any more details.

Twice before, there have been hydrogen explosions which have ripped off some roofing from the plant, but these had not damaged the reactor vessels, authorities have said. There was no immediate word on any damage from this third blast.