For Japan, it’s nowhere near over, at least if the Pasadena Jet Propulsion Laboratory (creator of such brainiac things as the Mars rovers) is correct.

While Japan has experienced numerous magnitude 5 and 6 aftershocks (405 in total to be precise), the big ones are still to come: “Japan’s largest quake on record, which hurled a 7-meter (23-foot) wave landward after one plate slid beneath another off the coast of Sendai, had an 8.9 magnitude.

The aftershocks will likely include at least one measuring 8 and 10 of magnitude 7, JPL geophysicist Andrea Donnellan said.

All are many times larger than the 6.3-level New Zealand quake in February that leveled the Christchurch business district and killed 160.”

Should we get more 8+ earthquakes, the likelihood of further tsunamis unfortunately jumps exponentially. And while scientists have long been expecting “the Big One” to hit Los Angeles so far without success, unfortunately carrying over that logic to Japan is more than naive.

(Click on image to go to the USGS aftershock map.) 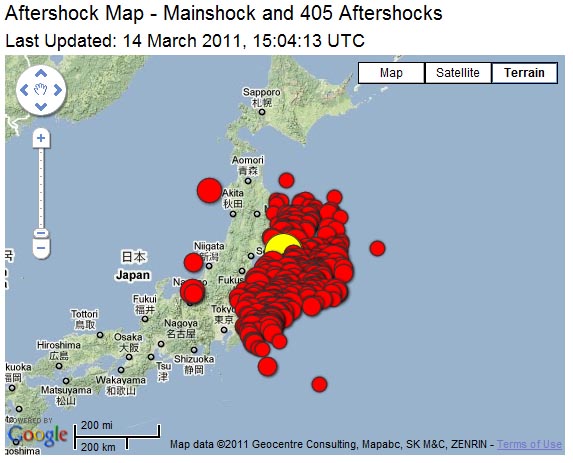 More from BusinessWeek on predicting earthquakes:

Pressure levels changed on the undersea plates extending 500 kilometers to the east and west of the epicenter, likely provoking aftershocks “for a long time,” said Eric Fielding, a principal scientist at the Jet Propulsion Laboratory. The Pasadena, California, research group is using data from Japan to help scientists forecast follow-on shifts in crustal plates.

“The segments south and north of the Sendai rupture zone will have large increased stresses,” Donnellan, a principle investigator who models probable shifts in the Earth’s crust, said in written answers to Bloomberg. “While a few large earthquakes will occur soon after the last one, most will occur at much longer times, typically years, after the last one.”

Predicting earthquakes with precision eludes scientists, who until recently lacked data to improve forecasts. The disaster will aid research into how the mosaic of plates around the world can shift and trigger shocks, building on measurements from Indonesia in 2004 and Chile in 2010 that gave geophysicists insight into how the biggest tremors change Earth’s geology.

Japan, the world’s third-largest economy, lies on the so- called Ring of Fire, an arc of volcanoes and fault lines surrounding the Pacific Basin including Sumatra, site of the Indonesian quake.

“Before 2004, most geophysicists taught that only limited parts of the Ring of Fire could be capable of generating really giant earthquakes,” Antonio Piersanti, head researcher of the Rome-based Italian Institute of Geology and Vulcanology, said in an e-mailed statement. “After the Sumatra event and especially after this last event maybe we should seriously consider the possibility that any part of the Ring of Fire could generate a 9-plus earthquake,” Piersanti said.

Combined that with another disclosure from the BBC blog and one can see why outbound flights from Tokyo may soon become a very high margin product:

UK nuclear expert John Large tells the BBC that the wind direction off the east coast of Japan is moving round to the south, which could take any radioactive plume from the Fukushima plant over the Tokyo region.