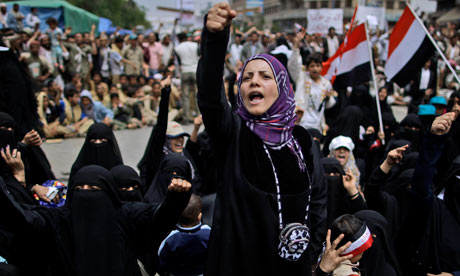 Yemeni security forces have killed four people and wounded hundreds more in the second day of a harsh crackdown on anti-government protests, witnesses said. One of the dead was a 15-year-old student.

The assault with gunfire and tear gas was the toughest yet by the government in a month of protests aimed at unseating the president, Ali Abdullah Saleh, who has been in power for 32 years. An ally in the Obama administration’s fight against al-Qaida, Saleh had appeared to be one of the Arab leaders most threatened by the regional unrest inspired by revolts in Egypt and Tunisia.

The violence began with a pre-dawn raid on a central square in the capital, Sana’a, where thousands of pro-democracy protesters have been camped out.

One protester died from a bullet to the head, which may have come from a sniper on the rooftop of a nearby building, witnesses said.

“We were performing dawn prayers when we were surprised by a sudden hail of bullets and tear gas,” said Walid Hassan, a 25-year-old activist. “The protesters began throwing rocks at security … it was total mayhem, a real battlefield.”

A few hours later, another protester was shot dead in a nearby street. In the city of Dar Saad in the southern province of Aden, police used live fire and tear gas to disperse a crowd of several thousand, killing one demonstrator. .

Saturday’s raid on the Sana’a square came after Yemen‘s largest demonstrations in a month the day before were met by police gunfire that injured at least six protesters.

In a statement from the Foreign Office, he said “I was shocked by the unacceptable violence seen in Sana’a today. The United Kingdom remains seriously concerned over repeated clashes with protesters and reports of intimidation of journalists in recent days. This is in direct contradiction to the President’s recent announcement on constitutional reform and fresh elections, which we have welcomed. We urge the Yemeni authorities to demonstrate their commitment to an orderly and peaceful transition by respecting the right of peaceful protest and free speech.”

The Foreign Office is now advising British nationals to leave Yemen as soon as they can in light of the intensity of the violence.