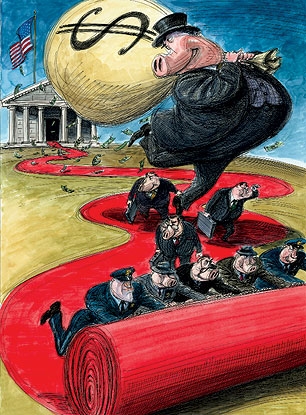 Over drinks at a bar on a dreary, snowy night in Washington this past month, a former Senate investigator laughed as he polished off his beer.

– Former Senator And Chairman of the Congressional Oversight Panel Ted Kaufman: ‘TARP Was The Largest Welfare Program For Corporations And Their Investors Ever Created In The History Of Humankind’ 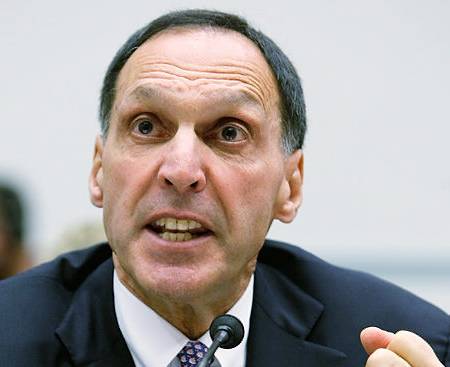 The U.S. government’s investigation into the collapse of Lehman Brothers Holdings Inc. has hit daunting hurdles that could result in no civil or criminal charges ever being filed against the company’s former executives, people familiar with the situation said.

In recent months, Securities and Exchange Commission officials have grown increasingly doubtful they can prove that Lehman violated U.S. laws by using an accounting maneuver to move as much as $50 billion in assets off its balance sheet, which made it appear that the securities firm had reduced its debt levels.

SEC officials also aren’t confident they could win any lawsuit accusing former Lehman employees, including former Lehman Chief Executive Richard Fuld Jr., of failing to adequately mark down the value of the large real-estate portfolio acquired in Lehman’s takeover of apartment developer Archstone-Smith Trust or to disclose the resulting losses to investors, according to people familiar with the matter.

People close to the investigation cautioned that no decision has been reached on whether to bring civil charges, adding that new evidence still could emerge. Investigators are reviewing thousands of documents turned over to the SEC since it began its probe shortly after Lehman tumbled into bankruptcy in September 2008 and was sold off in pieces. Officials also have questioned a number of former Lehman executives, some of them multiple times, the people said.

But after zeroing in last summer on the battered real-estate portfolio and an accounting move known as Repo 105, SEC officials have grown more worried they could lose a court battle if they bring civil charges that allege Lehman investors were duped by company executives. The key stumbling block: The accounting move, while controversial, isn’t necessarily illegal.

In a possible sign that the probe has slowed, the SEC hasn’t issued a Wells notice to Lehman’s longtime auditor, Ernst & Young, according to people familiar with the situation. The firm had concluded that the accounting in the Repo 105 transactions was acceptable. Wells notices are a formal signal that the SEC’s enforcement staff has decided it might file civil charges against the recipient.

An SEC spokesman declined to comment. In a statement, Ernst & Young said the firm stands “behind our work on the Lehman audit and our opinion that Lehman’s financial statements were fairly stated in accordance with the U.S. accounting standards that existed at the time.”

The snags are the latest sign of trouble for the SEC and other U.S. regulators trying to punish companies and executives at the center of the financial crisis. So far, no high-profile executives have been successfully prosecuted. Last month, a federal criminal investigation of former Countrywide Financial Corp. Chief Executive Angelo Mozilo was closed without charges.

The U.S. government lost the only crisis-related case to go to trial when former Bear Stearns Cos. hedge-fund managers Ralph Cioffi and Matthew Tannin were acquitted in November 2009 of criminal charges related to the $1.6 billion collapse of their hedge funds.

If SEC officials decide not to take enforcement action against former Lehman executives, they likely would escape criminal prosecution, too. The Justice Department “tends to follow the SEC’s lead in these complex financial cases, so reluctance to pursue civil charges generally means the federal agencies won’t take a criminal case,” said Elizabeth Nowicki, a former SEC lawyer who is an associate professor at Tulane University School of Law in New Orleans.

A spokeswoman for the Justice Department declined to comment on Lehman. In a statement, she said the agency “will continue to root out financial fraud wherever it exists. When we find credible evidence of criminal conduct—by Wall Street financiers, lawyers, accountants or others—we will aggressively pursue justice. However, we can and will only bring charges when the facts and the law convince us that we can prove a crime beyond a reasonable doubt.”

A year ago, it looked as if the SEC and federal prosecutors had a road map to use against Lehman’s former top executives. Last March, the Repo 105 transactions were condemned by court-appointed examiner Anton R. Valukas, who said in a report that they enabled Lehman to “paint a misleading picture of its financial condition.”

In the transactions, Lehman swapped fixed-income assets for cash shortly before the securities firm reported quarterly results, promising to buy back the securities later. The cash was used to pay down the company’s debts. Emails sent by executives at the company referred to Repo 105 as a “drug” and “basically window dressing.”

All four former Lehman executives have been scrutinized by the SEC, according to people familiar with the matter. Their lawyers didn’t respond to calls seeking comment. They previously have denied any wrongdoing related to Repo 105.

Mr. Cuomo’s successor, Eric Schneiderman, is “fully committed” to pursuing the case, a spokesman said. Ernst & Young has vowed to vigorously defend itself against accusations that the maneuver violated generally accepted accounting procedures.

In contrast, SEC officials generally have concluded that the transactions were consistent with accounting standards, according to people familiar with the situation.

And agency officials aren’t convinced that Lehman shareholders suffered material harm, since executives were trading one type of highly liquid asset for another, these people said. They said the SEC would face a far lower bar if Lehman had converted illiquid or damaged assets, such as Archstone’s real-estate holdings, into cash using Repo 105.

Mr. Fuld and other former executives could face charges of making misleading statements about the company’s health before it sank. That likely would be an uphill battle for the government, according to people familiar with the matter, partly because the executives relied on legal and accounting opinions.

British law firm Linklaters LLP signed off on the Repo 105 transactions, all done through the securities firm’s European arm. Linklaters declined to comment.

SEC investigators also have looked for evidence that Lehman overvalued positions held by Archstone, which it acquired in 2007. SEC officials aren’t convinced, though, that they can build a strong enforcement action around such claims. In his report, Mr. Valukas wrote that he didn’t find “sufficient evidence to support a colorable claim for breach of fiduciary duty in connection with any of Lehman’s valuations.”

It isn’t clear what the Lehman executives have said to SEC officials during the probe. Last year, Mr. Fuld told lawmakers he had “absolutely no recollection whatsoever of hearing anything” about Repo 105 at the time of the transactions. Lehman’s demise was caused by “uncontrollable market forces” and the U.S. government’s unwillingness to rescue the firm, he said.