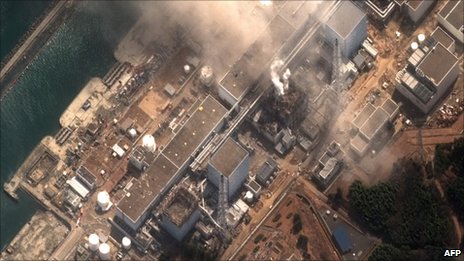 A satellite photo of the Fukushima Daiichi plant showed the damage done to reactors 1 and 3, where there was an explosion on Monday

Technicians are battling to stabilise a third reactor at a quake-stricken Japanese nuclear plant, which has been rocked by a second blast in three days.

The fuel rods inside reactor 2 at the Fukushima Daiichi plant have been fully exposed on two separate occasions, raising fears of a meltdown.

Sea water is being pumped into the reactor to try to prevent overheating.

A cooling system breakdown preceded explosions at the plant’s reactor 3 on Monday and reactor 1 on Saturday.

The latest hydrogen blast injured 11 people, one of them seriously. It was felt 40km (25 miles) away and sent a huge column of smoke into the air.

The outer building around the reactor was largely destroyed.

Japan is racing against time to prevent a potential nuclear disaster after a third reactor at the quake-stricken power plant north of Tokyo went into meltdown on Monday.

Engineers have been battling for three days to prevent a nuclear disaster at Tokyo Electric Power’s Daiichi plant in Fukushima. But they have faced successive setbacks trying to cool down three reactors whose cooling systems were damaged after Japan was struck by a devastating 8.9 magnitude earthquake and tsunami on Friday.

In the first full day of trading since the earthquake, Japan’s equity market reacted violently even as the Bank of Japan announced it would inject a record Y21,800bn ($265bn) in funds to financial institutions. The Nikkei plunged 6.2 per cent, its biggest drop in more than two years.

Earlier on Monday, efforts to release gas out of the overheating reactor caused an explosion at reactor No. 3, although officials said that crucially its protective containment vessel had not been damaged.

While engineers struggled to contain the nuclear crisis, the official death toll from Friday’s earthquake and tsunami reached 1,800. But the final death toll is expected to be much higher. Police in Miyagi prefecture, one of the worst affected regions, have estimated that at least 10,000 people were killed in their district alone.

In a sign of the growing concern about leaked radiation, the US navy on Monday began moving ships, including the USS Ronald Reagan aircraft carrier, that were helping the Japanese relief effort away from the area.

Separately, France has become the first country to advise its nationals to leave Tokyo amid growing alarm about problems at the nuclear power plant and a warning from meteorological agency about a possible large aftershock in the Kanto region.

On Monday evening, Tepco said water levels at the No. 2 reactor – where the coolant systems had been functioning better than those at the other reactors – had fallen low enough to expose the radioactive fuel, and suggested that the overheated fuel had partially melted, as is suspected to have happened at reactors No. 1 and No. 3.

The Japanese nuclear safety agency said the sudden drop in water level at reactor No. 2 went unnoticed for a while because their experts were checking the other reactors.

The earlier explosion at the No. 3 reactor on Monday came after combustible hydrogen had been collecting inside the reactor building since Sunday, as engineers vented gas from inside the reactor’s protective containment vessel in an effort to relieve pressure.

Tepco said the reactor’s protective containment shell remained intact after the blast. A similar explosion destroyed part of the plant’s No. 1 reactor building on Saturday.