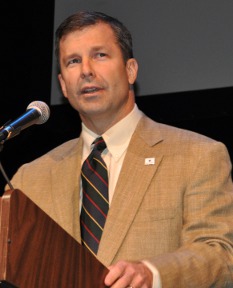 The lawmaker behind a bill Texas that would levy felony charges against overly-touchy security personnel may be staunchly Republican, but he truly believes his cause isn’t one tied to the political left or right.

“We’re talking about what would be a criminal act in any other place,” Rep. David Simpson (R) told Raw Story on Monday. “If you viewed someone naked without their permission or consent, or as a condition of travel, it would be sexual harassment or vouyerism. If you touched people’s privates, that would be sexual assault.

“This is not a left or right issue,” he added. “They are treating American citizens with great indignity, and we’ve got to make this right.”

Though unlikely to pass — even with a GOP supermajority in the Texas legislature — Simpson’s proposal has become a cause célèbre for civil libertarians, many of whom adamantly oppose the TSA’s screening procedures.

The bill would amend a Texas statute pertaining to “the offensive touching of persons,” extending it to security personnel who conduct a search “without probable cause.”

That’s actually the exact wording used in the Constitution in the section outlining prohibitions on unreasonable search and seizure. The legal standard for a lawful search is probable cause: a requirement that law enforcement must meet before most judges will issue search warrants.

The bill specifies that “offensive” touching which takes place as “part of a search performed to grant access to a publicly accessible building or form of transportation” would be treated as a state jail felony.

“I have broad bipartisan support for the bill — at least seven Democrats, and one’s a joint author,” Simpson said. “There’s about 22 other people already signed on too.”

‘Traveling is not a criminal act’

“What we’re saying here is, these bureaucrats have gone too far,” he continued. “We’re not against national defense; we’re not against security. We just don’t want to do it at the expense of our liberties. The terrorists want to take away our liberties and here we have our very own government terrorizing innocent travelers. Traveling is not a criminal act. You need probable cause [to conduct a search].

“Unless there’s reason to believe someone has an explosive or intends to commit a criminal act, you shouldn’t be treating them as a criminal and that’s what we’re doing. It’s un-American and it needs to stop. C.S. Lewis once wrote … that tyranny exercised for the good of its victims may be the most oppressive, and I agree with him. They’re trying to make us think we’re safer, but we’re not.”

Simpson added that children and amputees are especially vulnerable, and frequently singled out by TSA agents.

“Having a child unzip their pants in public, or even in private, should never happen,” he said. “It should not happen, period.”

“Sexual assault should always be a criminal act. How are we protecting our businesses outside the industry? They have cameras, they have locks and in some cases they have guns. I’m for letting the airlines determine the best method. I think you’ll have some that want to compete.”

“It needs to stop somewhere,” he insisted. “If we don’t nip this thing in the bud it’s gonna come to our sidewalks, to our football games. The DHS was considering as recent as five years ago doing covert scanning of the public, but they’ve denied pursuing that any further. That they would consider it shows they have no regard for the Fourth Amendment.”

A spokesperson with the Department of Homeland security refused to comment on the pending legislation, but noted that in many cases still, state laws do not trump the federal government.

The bill’s text was available online.

A similar bill by the same author, which would restrict the TSA’s use of backscatter x-ray machines, was also available online.