– Portugal: Only €4 Billion In Cash Vs €20 Billion In Bond Maturity And Deficit Outflows In 2011

Moody’s has reignited the storm of controversy over the power of rating agencies after it downgraded Spain, and warned that the bank clean-up will cost vastly more that claimed. 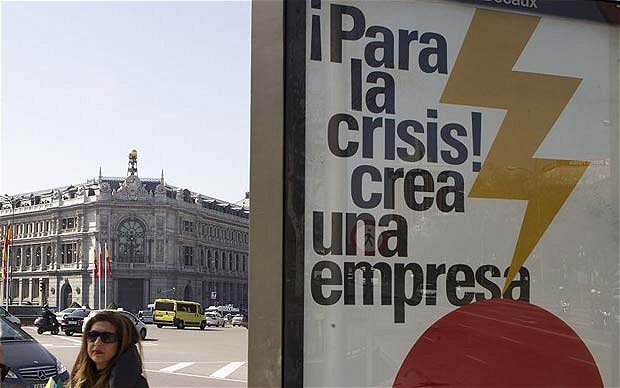 A poster reading ‘Stop the crisis, create a company’ outside the Bank of Spain building in Madrid Photo: AP

The move comes a day before a crucial summit of EMU leaders to thrash out a “grand deal” intended to create workable machinery for the euro and end the debt crisis once and for all.

Moody’s cut Spain’s credit by one notch to Aa2 and said Madrid’s estimates of €20bn (£17.2bn) of fresh capital needed to rebuild the banks and cajas is too low. “The overall cost is likely to be nearer €40bn to €50bn,” rising to as much as €120bn in a “stressed scenario”.

The country has clawed its way out of the awkward squad over recent months by slashing its twin deficits, and shaking up the labour market, but it remains vulnerable to shocks.

Spanish premier Jose Luis Zapatero dismissed Moody’s downgrade as an insult, insisting that the Banco de España alone had the “information, credibility, and truthfulness” to judge the needs of Spanish lenders.
The central bank said on Thursday that 12 cajas (savings banks) and other banks must raise €15.2bn between them by September, led by Bankia (€5.8bn), Novacaixagalicia (€2.6bn), and Catalunyacaixa (€1.7bn).

Moody’s praised Spain for its market reforms and said “debt sustainability is not under threat.” But it also warned of fresh “episodes of funding stress”. The government, regional juntas, and banks must together must raise or roll over €300bn of debt this year.

Fitch Ratings also issued a report concluding that the bail-out costs might spiral, putting the figure at €97bn in an Irish-style “stress scenario” where property losses reach 58pc. The Irish parallel has infuriated Madrid since delinquency rates on Spanish homes are low. Loan-to-value ratios on mortgages average just 62pc.

Spanish officials said it was astonishing that Moody’s should drop its bombshell hours before the central bank was due to publish its own far more detailed analysis. “Moody’s don’t explain how they come up with these numbers,” said one source.

European anger over the power of “Anglo-Saxon” rating agencies has been welling for months but has now reached fever pitch. Greece’s finance minister George Papaconstantinou wrote on Thursday to the EU authorities calling for restraining action after Moody’s cut Greek debt three notches three-notch. “Such unjustified and imbalanced decisions could become self-fulfilling prophecies. Rating agencies must be regulated effectively at a European and world level,” he said.

Brussels is drawing up tougher rules, perhaps making Moody’s, Fitch, and S&P liable for the damage of “incorrect ratings”. An EU source said it was scandalous that one agency had rated Greece by sending a single person to the country twice a year for a half a day. “When the IMF goes in, they send a whole team for a week. We want to know how much serious time and effort goes into these ratings.”

Spanish officials feel aggrieved that they are being punished after taking the lead in eurozone bank reform, going beyond Basel III rules with earlier compliance and requirements for core Tier I capital of 10pc for some banks with a reliance on wholesale funding. Indeed, the ECB even warned in its monthly bulletin that Spain is perhaps too “ambitious”, creating the risk of a credit squeeze .

For all the fury over Moody’s, Spain undoubtedly faces an ordeal by fire as the ECB prepares to raise rate rises as soon April. One-year Euribor rates used to set the cost of most Spanish mortgages and corporate loans have surged to 1.95pc since the ECB shift, part of an instant tightening effect rippling through Spain’s economy. This is potentially threatening. Private debt is near 240pc of GDP.

Julian Callow from Barclays Capital said Spanish house prices are falling steeply after a lull late last year, with the Fotocasa index falling at 5.2pc rate. “Spain has suffered a series of negative shocks, with energy costs going up and no magic package yet in sight from the EU. The ECB should not be rushing into monetary tightening at this moment, The more property prices fall, the more strain this puts on banks,” he said.

EU officials are playing down hopes of an EU deal on Friday. A draft “Pact for the Euro” – an enhanced Stability Pact – has been watered down to meet the furious objections of several states and may not be enough to satisfy German demands for Teutonic rigour.

However, it still includes plans for a “debt-brake” along German lines that is constitutionally “binding” on all states, as well as intrusive rules on pensions, collective-bargaining, labour costs, and wage indexation.

It empowers the European Commission to vet rules “before” they have been approved by national parliaments. This treads on sensitive toes. The power to tax, borrow, and spend is the essence of national sovereignty. While the document states that the “prerogatives of national parliaments” should be respected, it is far from clear how these can be reconciled.

EU diplomats say the implicit quid pro quo is that Club Med must accept this straight-jacket to secure German backing for a more muscular bail-out fund (EFSF). Yet it is unclear whether Chancellor Angela Merkel can offer meaningful concessions, given a broad-based revolt by Germany’s Bundestag, Lander, and academia.

Mrs Merkel is likely to block plans to let the bail-out fund buy eurozone bonds, since this would usher in fiscal union by the back door. Nor does she seem willing to cut the penal rate of interest on the Irish and Greek rescue by enough to make any difference. Capital flight from the eurozone is likely to gather pace if none of these changes are agreed this month. This risks raising the stakes for Spain, and perhaps Italy.

The yield on Italian 10-year bonds pushed above 5pc on Thursday, a level that could start to endanger debt sustainability given the catatonic state of the economy and the sheer size of Italy’s public debt at 120pc of GDP. Italy’s industrial output fell 1.5pc in January, and has barely recovered from the Great Recession.

Bundesbank chief Axel Weber said that Germany’s rebound should not be exaggerated. The growth speed on the economy is just 1pc over time. “Europe will become more and more insignificant in the global economy,” he said.