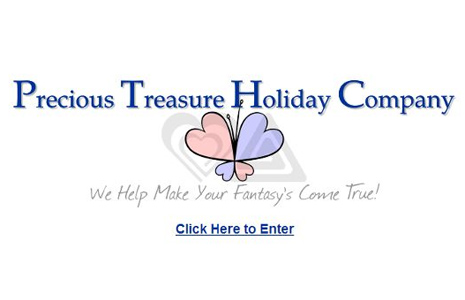 MARCH 9–In an aggressive bid to entice prospective “sex tourists,” the Department of Homeland Security last year launched an undercover web site that purported to arrange trips from the U.S. to Canada, where clients could engage in sexual activity with minors, The Smoking Gun has learned.

The “Precious Treasure Holiday Company” web site was active until a few weeks ago when its Massachusetts-based web hosting firm removed the site from its servers, apparently in response to a complaint about its content. Now, visitors to precioustreasureholidaycompany.com are greeted with the message, “This site has been suspended.”

After a year online, the DHS undercover site may have fallen victim to its own sleazy, overt come-on. As seen at right, the site’s front page carried three symbols that an FBI intelligence bulletin has identified as being used by pedophiles. Additionally, the site’s acronym, PTHC, is an allusion to “preteen hardcore” pornography. The site’s carefully misspelled motto–“We Help Make Your Fantasy’s Come True!”–also does little to mask its illicit intentions.

An account executive with the hosting firm, who appeared unaware that “Precious Treasure Holiday Company” was a government operation, said that following a site’s suspension an internal investigation is launched. Upon the review’s completion, a site is either reinstated or terminated. The executive, Jason Crawford, added that if a customer’s site is found to contain illicit material like child pornography, the FBI is contacted.

According to court records and several sources familiar with the sting operation, the  “Precious Treasure Holiday Company” web site was operated by investigators assigned to DHS’s Cleveland office. In affidavits sworn by Agent  Gabriel Hagan, the undercover web site is described as “offering ‘international travel’ from Cleveland, Ohio, to Canada for the purpose of engaging in sexually explicit conduct with minors.” While records reveal that the site was first registered in February 2010, further details about its owner (as well as administrative and technical contacts) have been carefully cloaked. 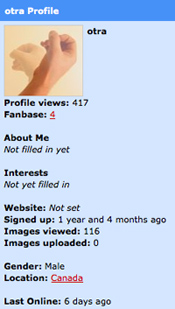 Using the online handle “otra,” one individual has been particularly enthusiastic in trying to drive traffic to the undercover operation. Posting on several sites, “otra” enthused that “Precious Treasure Holiday Company” was a “great place for real incest” and the “only place for the real thing.” In one online profile, “otra”–who is described as a Canadian male–opted for a profile photo (seen at left) showing a hand in a masturbatory position. Shortly after the DHS site went live, an anonymous poster on a Swedish bulletin board reported that, “I found a website where you can travel to go have sex with kids.” After including the nascent undercover operation’s web address, the poster added, “This website…is an actually thriving business that is legit.”

While it is difficult to gauge the overall success of DHS’s efforts to drum up visitors, the “Precious Treasure Holiday Company” operation has led to the conviction of at least one defendant on felony charges (he was recently sentenced to 20 years in prison), while another man is under indictment for conspiring to transport an eight-year-old girl from Canada to the U.S. with the intent of having her engage in sexual activity.

Federal court records indicate that two other individuals became targets of the DHS operation after visiting the undercover web site last year and engaging in subsequent e-mail exchanges with investigators. One subject is a former Marine now deployed in the Middle East with the Army Reserves.

In every instance, targets have visited the undercover web site and sought, via e-mail, additional information about “Precious Treasure Holiday Company” offerings. Agents responded by sending back a “brochure” with details of the sex tour to Canada. The brochure, a court filing reported, also “requested answers to specific questions so not to disappoint the customer.” These included queries about the preferred age of the minors with whom the prospective sex tourist sought to consort. The brochure also noted that a female employee would accompany customers to Canada (this role has been played by Agent Hagan).

In some cases, a target was also provided a username and password that would allow access to a section of the DHS site containing an online “catalog” of girls aged eight to 14. Two men were arrested last year when they traveled to meet a child advertised in this catalog. 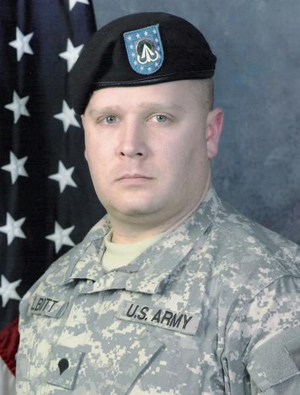 In a mid-June 2010 e-mail from his Yahoo account, Talbott, pictured at right, wrote that he was “interested in a discreet package” involving an eight-year-old girl. While noting that, “I have no way of knowing if you are law enforcement or FBI,” Talbott asked about rates and sought “some sort of assurance that you are a legit company. Picture of some of the services provided maybe?” An account of Talbott’s e-mail exchanges with Agent Hagan is contained in a search warrant application excerpted here.

After receiving the brochure (and being provided access to the online catalog), Talbott described one particular child as “an attractive young lady, who would more than suit my needs.” He added, however, “I will not be back in the country for another year and a half as I am abroad.” Along with asking about adoption options mentioned in the brochure, Talbott wrote, “Again, I still have no assurances that you are legitimate, and not a sting operation or scam.”

Four months passed without further contact from Talbott. Then, on October 20, he sent an e-mail seeking “an updated catalogue of your females.” Based on entries from Talbott’s MySpace page, the e-mail was sent while he was home on leave in Spokane. In an October 14 post, he told of returning in a few weeks to the “sandbox” (Talbott previously wrote of being deployed in Kuwait).

Included with the October 20 e-mail was a naked photo of a prepubescent girl. “Attached is a pic of what I like just to show that I am not FBI. I would love a sample pic of one of your girls to verify something that shows a bit more than a clothed girl that looks like one of the dateline bait girls. All I need is to find myself on dateline.” While assuring that he was not a law enforcement agent, Talbott still appeared unconvinced that the web site’s proprietors were not themselves carrying badges or NBC employees.

After identifying Talbott as a target of the DHS probe, a TSG reporter sent a series of detailed e-mails to the Yahoo account seeking comment. In an initial response, the recipient replied, “I’m sorry, why are you calling me Sgt. Talbot? And what image was sent from this email? Do I need to run another virus scan?” Subsequent e-mails noted that, “I have nothing to talk to you about” and “I don’t like being accused of shit like this. You are sick.”

In one e-mail, a reporter included a link to a TSG page that contained an excerpt from a search warrant for the contents of the swlfty@yahoo.com account. Within minutes of the e-mail being sent to the Yahoo account, the particular TSG page, server records showed, was accessed by an IP address registered in Kuwait City.

Additionally, after TSG e-mails were sent last month to the Yahoo account, Talbott’s profile page on Netlog, a social networking site targeting European youth, was edited. His name and photo were removed from the page, which carried the handle “swlfty.” His date of birth was changed. And the photos and nicknames of seven female friends were deleted. Of those friends, four were 14, one was 15, and another was 16.

Talbott’s Netlog page, which described him as “a man of particular tastes,” was subsequently deleted in its entirety (though a screen grab of the original page can be seen here). But his MySpace page, which contains the exact profile photo that was deleted from the Netlog page, remains online. (3 pages)