Tens of thousands were unaccounted for and whole towns wiped off the map as the full horror of Japan’s “super-earthquake” began to emerge on Saturday. 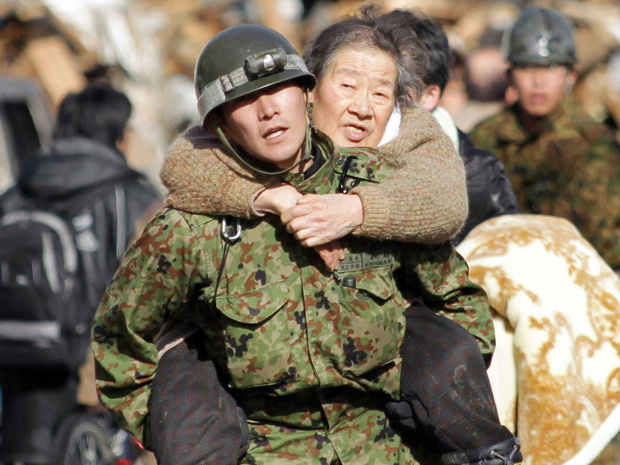 A soldier carries an elderly woman to an evacuation shelter in Kesennuma Photo: AFP/GETTY IMAGES

Fears were compounded by a massive explosion on Saturday morning at a nuclear reactor, 160 miles north-east of Tokyo. Seawater was being pumped into the Fukushima Daiichi nuclear power plant in an attempt to cool the radioactive core, while 90,000 people were evacuated from within a 12-mile radius.

Local authorities reported that almost 10,000 people – out of a population of 17,000 – were missing from the fishing port of Minamisanriku, which was engulfed by huge waves that swept inland for six miles. The earthquake was so powerful that Italy’s National Institute of Geophysics and Volcanology said the Earth’s axis shifted 9.8in [25cm]. The US Geological Survey said the main island of Japan had moved 7.8ft [2.4m].

David Warren, the UK’s ambassador to Japan, said hundreds of Britons were still unaccounted for but officials were frantically trying “to make contact with British people who may have been caught up in this terrible event”.

Aerial photographs showed that Minamisanriku had been destroyed by Friday’s tsunami, its flattened houses covered in a thick layer of mud and debris.

Other towns along the north-east coast of Honshu island, including the city of Sendai, which has a population of more than one million, bore testament to the devastating power of the 8.9-magnitude earthquake and the resulting tsunami.

Hundreds of bodies were taken to makeshift morgues at a secondary school in Minamisoma and a gymnasium in Natori City, while many victims were washed out to sea and may never be found.

In Rikuzentakata city, one of the worst-hit areas, some 5,000 of the town’s 8,000 homes were destroyed, with the army claiming to have found up to 400 bodies.

The wreckage of one of four missing trains was discovered in pieces yesterday in the mud at the side of a track outside Shinchi. It is not known how many passengers were on board nor how many survived. The other three trains had still not been found.

The official death toll reached 1,700 last night but that is expected to rise sharply in the coming days.

Attempts to contact survivors and to reassure families both in Japan and abroad have been made difficult by failures in power and telephone lines. In areas hit by the earthquake, 5.6 million homes were without power yesterday and more than one million households were without water, prompting fears over health.

Rescue efforts have been hampered by the mud and wreckage that has engulfed the area, blocking roads and train lines, combined with a series of aftershocks that continued to hit the region – one quake that struck yesterday afternoon measured magnitude six. Some 50,000 military and other personnel were involved in the rescue and recovery effort with hundreds of ships, aircraft and vehicles heading for the Pacific coast area.

Further tsunami warnings prompted an exodus from Sendai last night, with reports of cars queuing to get out. Those from the city told of apocalyptic scenes, as exhausted survivors wandered the streets, picking their way past the debris of wrecked cars and fallen trees.

One witness told of a lorry tossed on to its side and the driver dead at the wheel, adding: “Then I saw a man walking, completely black with mud, like something from a horror film. He had been evacuated to a school gym but that too was hit by the tsunami.”

Kumi Onodera, 34, said it was “like a scene from a disaster movie” adding: “The road was moving up and down like a wave. Things were on fire and it was snowing.”

Some towns remained partly under water and fires continued to rage at oil refineries along the coast.

In Minamisoma, which remained largely submerged yesterday, Sayori Suzuki, a 34-year-old housewife, recalled the horror of the moment the quake hit, shaking her home violently and washing away the house of a relative.

“It was a tremor like I’ve never experienced before,” she said. “Another relative said he was fleeing in a car but watched in the rear-view mirror as the waves were catching up on him from behind. He escaped very narrowly.”

A 38-year-old man cried out for his missing father in front of what remained of his house. “I tried to find items to at least remember him by but there was nothing,” said the grieving son.

The government in Tokyo said the confirmed death toll from Friday’s twin disasters was expected to rise dramatically. Yukio Edano, the chief cabinet secretary, said: “Unfortunately, the actual damage could far exceed that number, considering the difficulty assessing the full extent of damage.”

Making any assessment of the scale of death and destruction has been hampered by the collapse of the telephone and power networks in large swathes of the affected area. Hundreds of thousands of Japanese are desperately waiting for news of family and friends.

In a televised address to the nation, Naoto Kan, Japan’s prime minister, described the earthquake and tsunami as an “unprecedented national disaster”.

He said: “I want the people to overcome this quake … by utilising the strengths of each of you, together with the utmost efforts of the government and the related agencies that it supports.”

The explosion at the Fukushima nuclear power plant, which was caused by a build- up of hydrogen gas inside the building, destroyed its outer structure but the containment chamber surrounding the nuclear core remained intact, preventing a potentially catastrophic radiation leak.

Nevertheless, radiation levels after the explosion reached the equivalent of what a human being is normally allowed to be exposed to over the course of an entire year. Three workers were being treated for severe radiation exposure.

Although experts insisted that there was no risk to the wider public, health officials were distributing potassium iodine tablets to residents who, while awaiting evacuation, were told to turn off air-conditioners, stay indoors and not to drink tap water.

People leaving their homes were warned to avoid exposing their skin and to cover their faces with masks and wet towels.

Mr Edano said it would take between five and 10 hours to fill the reactor core with seawater, and about 10 days before the reactor could be made safe.

However, Joseph Cirincione, who heads the Ploughshares Fund, a US-based anti-nuclear campaign group, said last night that the accident was one of the three worst in history — following Chernobyl and Three Mile Island — and could become a “complete disaster” if it went into full meltdown.

In Tokyo, public transport remained severely disrupted with tens of thousands of people still unable to get home more than 36 hours after the earthquake.

The Bank of Japan said it would do its “utmost” to ensure the stability of financial markets after the quake brought huge disruption to key industries, raising short-term concerns for the nation’s struggling economy.

Production was halted in many of Japan’s factories including its three biggest car makers — Toyota, Honda and Nissan — which all closed their plants.

The car manufacturers said the decision had been taken due to possible damage to domestic assembly plants and supply problems caused by the earthquake.

The Foreign Office has warned against non-essential travel to the country but a 63-strong team of British rescue workers was last night flying to Japan with two search dogs and 11 tons of equipment to search for survivors.

Roy Wilsher, 48, the chief fire officer for Hertfordshire, said before boarding the plane yesterday afternoon: “It will be difficult, daunting, and hard work, but we are prepared for it. We will do the best we can.”