(I have already been accused of “showing my ass and shaking my pom poms” for silver by 321Gold.com. I figured I would spend the month of March cheering on silver from the sidelines, since I am not a player

I made the prediction that silver would hit $50 by the end of March. This prediction was based off of a possible CRIMEX default of physical silver in the delivery month of March. By all accounts we are already looking pretty good with a 4% jump on Friday to $35.67. There are rumors that silver is already $50 at the CRIMEX and that JP Morgue is paying 80% premiums not to take delivery in the crucial month of March. There are only 40 million ounces available for delivery and little under $1.5 billion would expose this greatest of frauds.

I believe that we just are in the early stages of a Mania Phase in Silver. So I put a chart together to put this silver market into perspective. 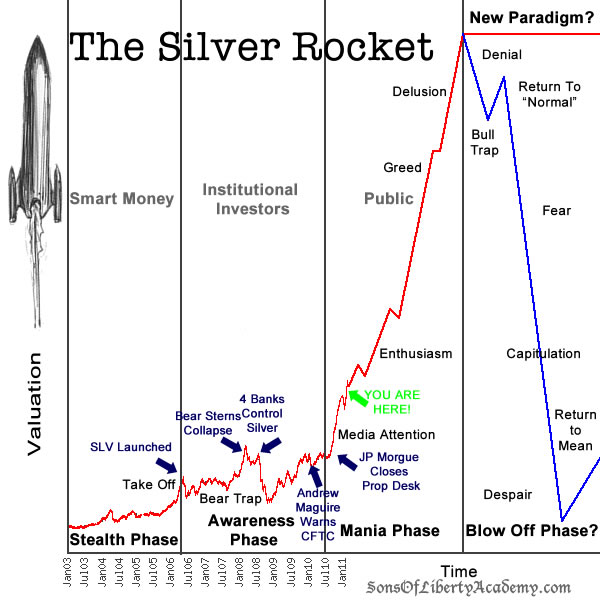 As always, I want to warn all of you “greedy, little bastards” to be very careful of this silver bull. This is a very volatile market and I know of many investors that got wiped out in 2008. There are big market makers that can turn the silver market on a dime. Remember, the market can stay irrational longer than you can remain solvent. If you need further analysis of silver fundamentals, I suggest you read the Silver Bullet and the Silver Shield.

ONLY BUY PHYSICAL SILVER BULLION IN YOUR POSSESSION. Do not buy anything else but real physical silver bullion. Not ETF’s, mining stocks, custodial accounts, precious metal IRAs or numismatic coins. If you need more information on how to buy physical silver read “I Get It Now.”

Every asset bubble starts with Smart Money finding ignored value. Smart Money takes early positions in the Stealth Phase. They do it quietly and without moving the market. Warren Buffet amassed 130 million ounces of silver in 1997 without really moving the market. Once they have strong positions staked out, they bring in their institutional buddies and this ushers in the Awareness Phase. The institutional investors bring real money to the table, your money. They bring private capital, pensions, 401ks and IRAs into the targeted market. This propels the market further with more money and legitimacy of institutional interest. The institutional investors make capital investments, new markets and strategies to propel the targeted market even further.

I mark the official beginning of the Awareness Phase April 28th, 2006 when the SLV ETF was launched. The ETF was the first major institutional foray into the silver market. This paper fiat Ponzi scheme was really a diversion to keep people out of real physical silver. They did this as demand for this nearly extinct precious metal increased. This, in hindsight, was the best thing to happen to the silver market, because it made people aware of this most precious commodity. When you are aware, you can prepare.

Most people do not remember before the huge collapse of the stock market in October of 2008, there was a “little” bank that blew up named Bear Stearns. The rumor was that Bear Stearns was shorting real silver on the CRIMEX while it rose from $14 to $21 in March of 2008. That marked an intermediate top in the silver market on St. Patrick’s Day 2008. It was coincidentally the day of the collapse of Bear Stearns. JP Morgue became custodian of all of those silver short positions. Now, only 4 banks “control” the silver market with their huge positions and seemingly unlimited funds to suppress silver. These big guys forced silver from $19 to $8 in four gut wrenching months in 2008. Anyone who was trading on margin or using leverage got destroyed. For me, I knew what was going on and increase my real silver holdings when it was on sale.

The Awareness Phase continued with the testimony of Andrew Maguire at the CFTC hearings about silver. Andrew Maguire was a former silver trader that turned whistle blower on the insider manipulation of the silver market. His very public and shocking testimony exposed how the big guys manipulate the silver market. The worst part is, that just like the Bernie Madoff case, the authorities ignored the warning signs. His most shocking claim was that there was 45 ounces traded for every 1 ounce of real physical bullion they have. Immediately after his surprise testimony he and his wife were involved in a very suspicious hit and run incident. All of Andrew Maguire’s scheduled interviews were canceled, except for one on King World News. After he gave that interview, KWN was hacked and the interview erased. Why are they trying to close the barn door after the horse has left the barn? The word is out there now and what was once conspiracy theory is now conspiracy FACT.

I believe that we have entered the Mania Phase that started on August 24th, 2010. That was one week before JP Morgue closed their Proprietary Commodities Trading Desk. It was the end of a 2-year consolidation after Bear Trap of 2008. This day also started a nearly vertical moon shot in silver. Since then, silver is up over 100% in 6 months. Now even CNBC, Wall St Journal, and the Financial Times are talking about silver. This will further feed into the frenzy as people suddenly “get it” and sell every paper asset they have to buy physical silver.

I would submit to you that unlike every other bubble in history, it really would be different this time. This will not end in a typical Blow Off Phase. I believe this will usher in a New Paradigm for the world. This will not only be because of the fundamentals of silver. It will be about the need for real money when the destruction of the fiat debt/money paradigm occurs. Everything will be valued in relation to silver, much in the same way everything is valued in relationship to the dollar. Silver will return to its righteous spot as precious metal and will be the basis for a new paradigm of freedom in the world.

Source: Don’t Tread On Me