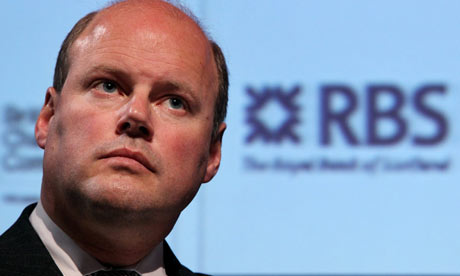 RBS chief executive Stephen Hester will enjoy a pay deal worth around £7.7m if he meets his targets. Photograph: Oli Scarff/Getty Images

Bailed out Royal Bank of Scotland has handed shares worth £28m to nine of its top executives in the latest round of multimillion pound bonus awards by the high street banks.

The precise scale of the payouts at the loss-making bank, 83% owned by the state through £45bn of taxpayer funds, will become clearer next week when the annual report is published.

But stock exchange announcements showed that the nine key staff – including chief executive Stephen Hester – had been handed bonuses for 2010 of £10m in shares with a further £18m in long-term incentive plans that run until 2014 when their exact value will be known.

Len McCluskey, Unite’s general secretary, branded the payments by the bank – which lost £1.1bn in 2010 – a “disgrace”. The RBS disclosures came just 24 hours after Barclays lifted the lid on the pay deals it makes to its highest earners – handing five of them £110m.

Hester – whose £2m bonus for 2010 was announced last month and will be paid in shares – is receiving an extra £4.5m in stock through the long-term incentive plan on top of his annual bonus and £1.2m salary. This puts him on track for a pay deal of around £7.7m. For 2009 he did not take a bonus but received just over £4m through the long-term share plan.

Finance director Bruce van Saun is receiving £1.3m in shares for his 2010 bonus and a further £2.8m through the long-term incentive plan.

The largest bonus awarded in shares is the £2.5m handed to John Hourican, head of the investment bank. Next week it is likely to emerge that Hourican has received more than that because he is also being paid in the bank’s debt – although he is not expected to top the £7.7m that Hester could be handed if he meets all his performance criteria.

The 2010 awards are coming from the £950m payout pool agreed with UK Financial Investments, which controls the taxpayer’s 83% stake in the bank, at the time of the Project Merlin deal.

The Merlin deal requires the pay of the five highest earners reporting to the chief executive to be announced and RBS is expected to make those disclosures next week. The nine included in Tuesday’s announcement are expected to be among them.

The prime minister has said he expects RBS to be the back-marker on pay, and while the 2010 payouts appear to have risen from 2009 – when RBS handed shares worth £16m to nine key managers through the long-term incentive plan and some £10m in bonuses – the bank stressed that numbers were not comparable. The latest payments included bonuses to Hester and van Saun for the first time.

“These awards follow exhaustive consultation with our shareholders and we believe they appropriately balance demonstrating restraint while remaining fully supportive of our leadership through the RBS turnaround plan,” the bank said.

Liberal Democrat Lord Oakeshott said: “There is precious little sign of restraint. Out of every £1 going to RBS top earners, 83p comes out of taxpayers’ pockets.”