And now it is getting religious, as planned by the elitists. 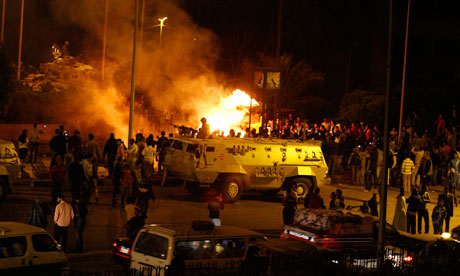 An armoured vehicle patrols after clashes between Muslims and Christians in Cairo. Photograph: Khaled Ali/AFP/Getty Images

Clashes between Muslims and Christians in the Egyptian capital, Cairo, have left 11 people dead and more than 90 wounded.

The clashes broke out on Tuesday night as thousands of Christians protested against the burning of a Cairo church last week. The church was set on fire after tensions escalated over a love affair between a Muslim and a Christian that set off a violent feud between the couple’s families.

The 18-day uprising that toppled the president, Hosni Mubarak, on 11 February has left a security vacuum. Police pulled out of Cairo and several other cities three days into the uprising and have yet to fully take back the streets.

Mubarak handed power to the military when he stepped down, but it does not have enough troops to police every street in Cairo.

On New Year’s Day, a suicide bombing outside a Coptic church in the port city of Alexandria killed 21 people, setting off days of protests. An off-duty policeman boarded a train on 11 January and shot dead a 71-year-old Christian man, wounding his wife and four others.

Egypt’s ruling generals pledged last week to rebuild the burned church. The country’s new prime minister, Essam Sharaf, has met Christian protesters in central Cairo to reassure them they would not face discrimination from his interim government.

However, at least 2,000 Christians joined the protest on Tuesday and a separate crowd of several hundred has been camping out outside the TV building for days to voice their anger at what they perceive to be official discrimination against them.