– Charlie Sheen rants against TV execs who fired him (CNN):

“Oh how they once begged to attend my perfect banquet in the nude,” Sheen intones. “Now they just beg for the keys to my gold.”

He calls himself the “Malibu Messiah” and repeatedly refers to himself as a warlock.

Chuck Lorre, the creator of the program that starred Sheen for eight years, comes in for the greatest abuse.

“I see you, you little worm, I see you behind your plastic smile, your bitchy pout, and your desperate need to be liked,” Sheen says, calling the TV executive “Chuck E. Cheese Ball,” not using Lorre’s full name.

He accuses Lorre of “narcissism, greed (and) hatred of yourself — or women,” one of several moments in the video that should give armchair psychiatrists plenty of material to mine.

He says of CBS chief executive Les Moonves: “You gave me your word so you gave me nothing. It must really suck being your missus,” again mangling the name.

“A high treason has occurred,” he concludes. “The scales of justice are in a state of radical disarray. Together we must right this infantile wrong. Stay tuned, good soldiers. I’ll see you all on the battlefield. Dogspeed.”

LOS ANGELES (JTA) — Actor Charlie Sheen, who has been accused of anti-Semitism, claims that he is Jewish and proud of it.

During a morning phone call March 4 to the Access Hollywood Live show, Sheen told hosts Billy Bush and Kit Hoover, “My mom [actress Janet Templeton] is Jewish. Here’s where it gets confusing — we don’t know who her father was.

A perplexed Bush told Sheen, “You’re getting accused of anti-Semitic remarks — you might want to say, ‘By the way, I’m Jewish!’ ”

Sheen responded, “I know, I know — stupid me. I just got caught sleeping, caught napping, which is rare for me. Anywho … But I’m proud of it. There you have it.” 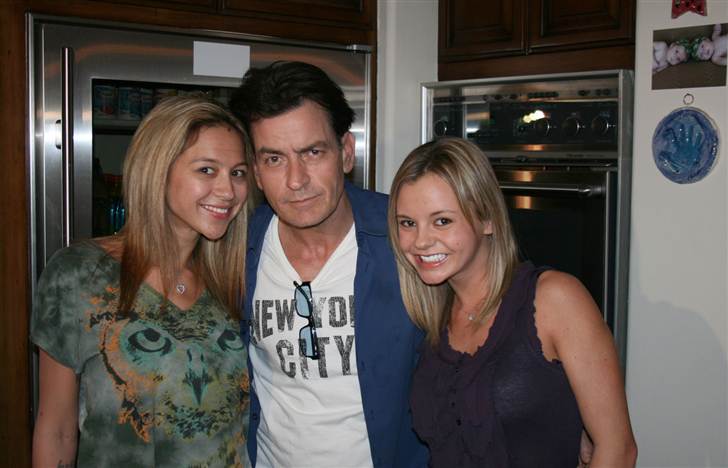 Mar. 8 (Bloomberg) — It would take most of us a few dozen lifetimes to amass 2 million followers on Twitter. And yet Charlie Sheen managed it in less than a week.

Last month, CBS Corp. (CBS) discontinued the hit comedy show “Two and a Half Men” after Sheen’s public jousting with senior management over a binge that the wild-man actor has described as “epic” and “radical.” Since then, he has become one of the biggest names on the planet.

What is fascinating about this whole fandango isn’t Sheen’s public dramas. It is the way he has given us a master-class in modern media promotion and how Wall Street shareholders, who ultimately own his former employer, have allowed themselves to be so completely outwitted.

Big companies seem to expect their celebrities to have stepped straight out of a 1950s suburb. From Kate Moss, to Tiger Woods, to Charlie Sheen, any hint of “inappropriate” behavior has the sponsors running faster than one of Sheen’s female companions can drop her, er, earrings.

And yet if there is a single lesson to be learned from the last decade, it is that the public — or the customer — is more forgiving. In fact, the more outrageously a celebrity behaves, and the less contrition he or she shows, the more we find them alluring. It pays to be bad, and slightly nutty as well.

If CBS can’t figure that out, perhaps it’s time the shareholders changed the management. Sheen clearly knows a lot more about how 21st-century business operates than they do.

As I write, Sheen has sent a Twitter update from “Sober Valley Lodge.” Rachel, one of the “goddesses” he lives with, has just left the building. He’s keeping his new customers — all 2 million of them — informed of every development.

Sheen has clearly struck a nerve. His over-the-top partying isn’t just amusing. It is the kind of escapism that audiences want. Rolling Stones guitarist Keith Richards has been an iconic figure for 40 years with his excessive lifestyle, so it wasn’t surprising to see that his autobiography topped the best-seller charts over Christmas. We don’t want celebrities who come across as drab and boring.

When British model Kate Moss was photographed taking drugs, her sponsors ran for cover. But Moss soon came back as popular as ever. Golfer Tiger Woods was dropped by many of his corporate backers after his chaotic love life was revealed. But so what? Tiger is back on the circuit, and once his swing is restored to its best, it is a fair bet the sponsors will show up again.

Sheen’s new army of followers on Twitter suggests his audience is rooting for his return. Anyone can see he will bounce back a bigger star than ever. CBS may well end up rehiring him. If it does, it will probably have to double or triple his pay. If it doesn’t, someone else will.

The odd thing is that they dropped him at all — and that shareholders didn’t demand the board’s resignation. After all, the company made some catastrophic errors of judgment.

First, Sheen is entitled to a private life. He’s not an elected official and doesn’t offer moral guidance to anyone. If he wants to party like a wild animal, that’s his business. He is a fine actor, as movies such as “Platoon” (1986) and “Wall Street” (1987) showed. It’s ridiculous to expect him to behave like a Sunday school teacher. Since when were sitcom stars expected to be celibate teetotalers? There is no obligation on him to live his life by anyone else’s rules.

Second, he’s the talent. A hedge fund wouldn’t fire the star trader if he was a drug user or an alcoholic. It would have to get rid of half the staff if it did. A publishing house doesn’t drop its biggest-selling writer because he or she keeps a bottle of vodka next to the computer. There would be far fewer books to read if it did. Media companies need stars more than stars need media companies. It’s that simple.

Third, and most importantly, they have misunderstood the way modern celebrity works. From Keith Richards to Paris Hilton to Charlie Sheen, we actually like the famous to be flamboyant, larger-than-life figures. They are fantasy characters through whom many people live vicariously. We like them to live outrageous lives. They do stuff that most of us don’t, but are happy to read about, and laugh about. It increases their appeal — and Sheen is simply the latest example of that.

(Matthew Lynn is a Bloomberg News columnist and the author of “Bust,” a book on the Greek debt crisis. The opinions expressed are his own.)