“To say that Islam belongs in Germany is not a fact supported by history”, Mr Friedrich said.

Let’s make up some other dumb statements:

That women should have equal rights is not supported by history and religion either!

That Christianity belongs in Europe has been certainly not a fact supported by history in 33 A.D.! 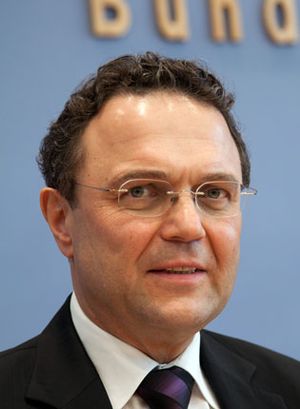 Hans-Peter Friedrich: insisted that immigrants ought to be aware of their host country’s “Western Christian origins” and learn German “first and foremost”.

Chancellor Angela Merkel’s newly appointed Interior Minister has reignited an already-heated immigration debate by insisting that Islam “does not belong” in Germany – a country with a resident population of four million Muslims.

Hans-Peter Friedrich took office only last week in a cabinet reshuffle, but his outspoken views have provoked instant condemnation from opposition MPs and a vitriolic response from Islamic groups which have branded them a “slap in the face for all Muslims”.

“To say that Islam belongs in Germany is not a fact supported by history”, Mr Friedrich said. At the weekend, he underlined his position, insisting that immigrants ought to be aware of their host country’s “Western Christian origins” and learn German “first and foremost”.

His views flatly contradicted those of Germany’s conservative President, Christian Wulff, who, in an attempt to defuse an increasingly bitter integration row, proclaimed in a keynote speech last year that Islam “belongs to Germany” precisely because of its large Muslim population.

Mr Friedrich, who belongs to the Bavarian wing of Ms Merkel’s ruling Christian Democrats, a group known for its opposition to Muslim immigration, insisted in a speech on Saturday that his stance was meant to bring “society together and not polarise it”.

He said he looked forward to discussing his position with Germany’s predominantly Turkish Muslims at a government-sponsored Islamic conference at the end of the month. The minister was appointed a day after Karl-Theodor zu Guttenberg, Germany’s popular Defence Minister, was forced to resign over a scandal in which he was found to have plagiarised large sections of his university doctorate.

In an attempt to minimise the damage, Chancellor Merkel quickly reshuffled her cabinet, giving Thomas de Maizière, her trusted Interior Minister, the Defence Minister’s job and importing Mr Friedrich to take over the Interior Ministry. Although his Bavarian conservatives have already called for a halt to Muslim immigration, few expected the new Interior Minister to spark controversy so quickly.

Lamya Kaddor, the chairman of Germany’s liberal Islamic Foundation, described his remarks as a “slap in the face for all Muslims”.

Insisting that Mr Friedrich was politically and historically wrong, she said his comments were “dangerous” as they threatened to undermine dialogue with Muslim groups.

Mr Friedrich’s remarks have been angrily criticised by opposition Social Democrats, Greens and several leading members of Ms Merkel’s liberal Free Democrat coalition partners. “Islam has been a real part of Germany for several generations now; it is unhelpful to deny this fact,” Hartfrid Wolff, a liberal MP, complained.

The row is the latest episode of a long-running debate about immigration, integration and assimilation, which erupted last autumn following publication of an inflammatory book entitled Deutschland schafft sich ab (“Germany is doing away with itself”) by Thilo Sarrazin, a former Federal Bank board member, who resigned his post following the furore his book caused.

Mr Sarrazin argues that Germans will soon be outnumbered by an underclass of semi-criminal Muslim immigrants, who have too many children, speak little or no German and depend on welfare payments to survive. His book has sold some 1.3 million copies, making it one of the biggest-selling titles in post-war Germany.

The debate has provoked headlines for months, yet it has so far been dominated by politicians, with German Muslim representatives taking only a back seat.

Last year, Ms Merkel proclaimed that attempts to build a multicultural society had “utterly failed”. Her views were echoed by David Cameron in a speech he made in Germany last month.

Mr Friedrich’s remarks were a clear sign that the hardline stance on integration taken by Ms Merkel’s conservatives is becoming more strident.