How do scientists create cancer in lab animals? The inject them with live cancer cells. 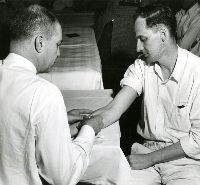 In the 1950s, Ohio State doctors injected prisoners at the Ohio Penitentiary with live cancer cells to test vaccines.

Henry Langlois was one of 38 soldiers who were told in 1955 that they were serving their country when they volunteered to inhale a biological agent that the government was testing.

A year later, inmates at the Ohio Penitentiary were told they were serving society when they volunteered to let researchers inject them with live cancer cells.

In the 1960s and 1970s, 15,000 Marines were told the same thing when Ohio State University scientists tested a pneumonia vaccine on them.

These and other government-funded experiments on military personnel, prisoners and mental patients are driving an investigation into the rules that are meant to protect people who volunteer for scientific studies.

The Presidential Commission for the Study of Bioethical Issues met last week to discuss “human subjects protection” after the government apologized in October for a 1940s-era experiment. In the research, Guatemalan soldiers, prisoners and mental patients were infected with syphilis to test penicillin treatments.

As the commission prepares a report it is to deliver to President Barack Obama in September, its work is stirring up memories.

Langlois, a 74-year-old Hilliard retiree, calls the summer that he participated in Q-fever tests at the Army’s Dugway Proving Grounds in Utah a mistake. He blames the government test for two leaky heart valves that a surgeon replaced in 2003.

Q fever is a disease caused by the bacterium Coxiella burnetii, which usually affects animals.

“They could not explain what caused it. I never smoked in my life,” Langlois said of his damaged heart. “When you are 18 years old, you do dumb things.”

At the time, such experiments were not unusual.

“It was kind of a free-for-all. It seemed like it was unregulated and uncontrolled,” said Karla Zadnik, chairwoman of one of three OSU committees that review proposals for research involving human subjects. Each year, OSU researchers conduct as many as 5,000 studies that involve human subjects.

“There are people here who work really, really hard every day to prevent anything even close to those events of the past from ever happening,” she said.

A review of Dispatch archives revealed several studies in the 1950s and 1960s that used prisoners at the old Ohio Pen. They included a vaccine test in which inmates were infected with tularemia, or rabbit fever, and a test of fluoride pills to determine their effect on human blood.

In 1958, tranquilizers were tested on 90 prisoners.

Perhaps the most famous was the cancer-vaccine test. As many as 160 prisoners were injected with live cancer cells.

The study, co-sponsored by Ohio State and the Sloan-Kettering Research Institute, ran from 1956 until 1961. Eventually, researchers said they lost track of most of the prisoners and thus had no results.

Zadnik said experiments such as that would not be approved today. There would be too many concerns about scientific value, risks and whether inmates and troops were pushed to volunteer.

“That’s a vulnerable population you could take advantage of,” she said.

Arthur Caplan, director of the University of Pennsylvania’s Bioethics Center in Philadelphia, said even tougher protections are needed. He said U.S. research increasingly involves human test subjects in other countries, and it’s not always clear whether the same rules are applied there.

And as industries such as pharmaceutical companies increasingly fund research efforts, there are growing concerns about whether finances are influencing the studies.

“Research itself is changing,” Caplan said. “You don’t want to (oversee) a 21st-century research enterprise with a 1970s guidance system.”