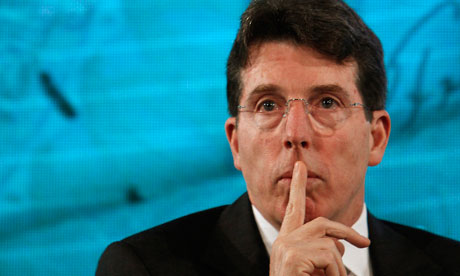 The announcements name up to 10 individuals whose share deals vested in 2010. However the bank does not have to identify the five highest earners who report to the chief executive, under the terms of the the Project Merlin deal between the banks and the government, under which banks agreed to set lending targets and show restraint on pay.

Under this disclosure, the bank reveals “individual one” took home £10.9m in salary and bonuses, while “individual two” took £10.6m. The next three took home £7.8m, £5.2m and £3.7m. They are expected to include del Messier as well as his co-head Rich Ricci, who was also handed shares worth more than £24m in March.

However, Barclays is expected to employ traders earning more than that £10.9m awarded to the “highest paid senior executive officer”.

HSBC was the first bank to comply with the Project Merlin rules a week ago – and also expose the fact that Merlin allows banks to hide its highest paid staff as traders are not included.

Under disclosure demanded by the authorities in Hong Kong, HSBC said that the five “highest paid individuals globally” – including a non-board director who took home between £8.4m and £8.5m – received a combined £34.3m in salaries, bonuses and pension contributions. But, under Project Merlin disclosure, the total of the “five highest paid senior executives” was just over £12m.

Diamond, who has been at Barclays for more than a decade after building its Barclays Capital investment bank, has taken home more than £60m in performance-related shares and cash in the five years since his pay was first revealed. He became chief executive on 1 January and was appointed to the board five years ago, when his pay had to be published.

Len McCluskey, Unite General Secretary said: “Bob Diamond tries to convince taxpayers that the era of remorse and regret within banking is over, yet he has no shame in pocketing a seven figure bonus. There is no possible justification for this highly paid individual taking home this enormous windfall.”

“This reported bonus demonstrates the failure of Project Merlin to bring restraint to the culture of greed within the top of our banks. While the workforce of Barclays continue to work hard, for modest salaries, their bosses continue to reap the rewards of taxpayer intervention and support for the financial services industry”.

The £6.5m bonus will include deferred shares and comes on top of a £250,000 salary Diamond received as an investment banker.

The bank is also complying with a new Financial Services Authority rule, which requires so-called “code staff” – those deemed to be high paid and taking big risks – to have their pay published in aggregate. Barclays said that it had 231 code staff who were paid £554m in 2010.