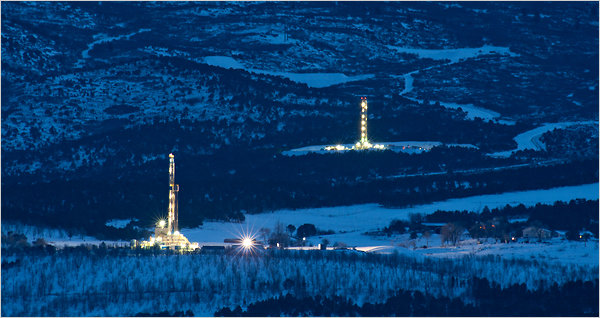 The NYT series launched Sunday (Feb. 27) with detailed accounts of radioactive wastewater, created by a Halliburton-developed extraction process called “fracking,” being dumped with impunity across the country. The article even included a “smoking gun” document, a “confidential industry study” from 1990 by none other than the American Petroleum Institute. The API’s secret study concluded that even with conservative assumptions, the radium in drilling wastewater dumped off the Louisiana coast posed “potentially significant risks” of cancer for anyone eating fish from those areas. I’m working on my own series of posts about this hazard in the Gulf of Mexico.

Meanwhile, it seems the regulators have taken steps to make sure no real regulating takes place despite laws on the books to prevent this disaster in the making. Remember, ounce for ounce, radioactive materials are the most toxic substances known to man. The current scientific consensus postulates that there is no known safe level of exposure to radioactive materials and that any exposure above background increases the risk of cancer.

The NYT story might leave the impression that we have no laws governing industry’s radioactive assault – but we actually do. The laws are on the books. They’re just being broken, and ignored. Many of the “regulators” are industry hacks waiting for the revolving door to come around. They have no incentive to tighten the screws on the way Big Oil and Gas do business. In fact, having seen it first-hand, regulators who do try to engage in true regulating frequently are forced out of their jobs or denied promotions.

Into that context we also have the landmark documentary “GasLand,” which features comments from my clients, increased its already high profile with an Adademy Award nomination. “GasLand” focuses on the gas-extraction process called “fracking,” and how it’s contaminating drinking-water sources across the country with radiation.

Now, another part of our perfect storm: A multi-agency federal task force, which met in New Orleans this past weekend, is making it fairly clear that the BP spill cleanup money will help fund a more fundamental program – one that takes aim at lingering issues like Louisiana’s coastal erosion problem. But if that scope expands, that 800-pounder will likely stir.

The Times-Picayune reports from the meeting:

…in New Orleans for its second meeting, the task force heard its staff – all federal employees on loan from a variety of agencies – explain how it would complete the restoration plan by Oct. 4, as required by President Barack Obama’s executive order setting it up…the plan will rely largely on a variety of restoration studies that already exist, or are underway, in the five states along the Gulf coast, said Bryon Griffith, deputy executive director of the task force staff.

Given that scope, radiation is bound to become a top issue. That’s because radiation is a major problem for the entire “mineral extraction industry,” which includes oil and gas, coal, uranium and a raft of other materials. It really doesn’t matter if you bring radium-226 into play by fracking or drilling or digging – the fact is, it’s risky, dangerous business. The industry, of course, has known this for decades. The whole issue of NORM, or naturally occurring radioactive materials, has been the core of my law practice for years.

Want to know how oil companies value human life? They know oil and gas formations contain environmentally high concentrations of radioactive material, and they know that the radioactive materials accumulate and become concentrated in the form of a toxic “scale” on pipes and other field equipment. What doesn’t become scale stays with the waste products that are dumped daily into the Gulf of Mexico, and as we now know, rivers which supply drinking water.

The radioactive material, primarily radium, can poison humans by inhalation and ingestion, and for decades, companies let contract workers clean the radioactive pipe without breathing protection, leading to widespread illnesses. Radium is known as a “bone seeker.” The body “sees” radium like it sees calcium so bones soak it up, which can cause cancer and other devastating diseases.

I’ve proven in court that the companies and the industry as a whole knew this for decades but did nothing, figuring they would deal with (and try to avoid) the liability issues later.

So with the radiation issue “going viral,” those of us who have warned of the 800-pound gorilla for years are starting to wonder if this crisis will finally reach the tipping point and get the urgent attention it deserves. That would be remarkable, because it will touch every phase of energy production and highlight one of the nation’s largest health-risk scandals.