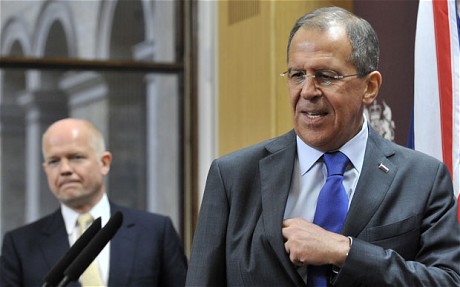 Jiang Yu, China’s foreign ministry spokeswoman, said Beijing is “concerned” about the prospect about military action against Libyan ruler Muammar Gaddafi, and expressed the hope that the violence in the country could instead be “resolved peacefully through dialogue.”

Sergey Lavrov, Russia’s foreign minister, also ruled out the idea of establishing a no-fly zone, saying that the world should instead “concentrate on the full implementation” of sanctions imposed by the United Nations Security Council.

“We need to avoid the superfluous,” he said.

All three countries have veto powers in the Security Council, so their approval is needed for a UN-mandated no-fly zone.

David Cameron, the Prime Minister, has said his government supports the imposition of a no-fly zone over Libya, a position that has been backed by Australia. The United States, whose Sixth Fleet operates out of Italy, said it was moving U.S. naval and air forces closer to Libya and working on contingency plans.

European states, who obtain a substantial part of their oil and gas supplies from Libya, have been exploring a wide ranging of options to end the violence in Libya, fearing that high oil prices could inflict damage on their fragile economic recovery.

Arab states have warned against any foreign intervention in the Libyan crisis and pledged to support the unity of the country even as they struggle with the implications of the unrest sweeping the Middle East and North Africa.

“We hope the Libyan people can overcome these difficult conditions, and that the Libyan leaders take brave stands to stop bloodshed and respect the legitimate desires and rights of its people to live in a free, democratic nation,” Zebari said.

Libya was excluded from the 22-member Arab League last week. But the uncertainty about Libya’s future has exposed embarrassing differences in Arab ranks, as has the wider crisis in the region.

The league announced that the next Arab summit, scheduled for Iraq later this month, has been postponed until May.

Amr Moussa, secretary-general of the league and a candidate for the presidency on Egypt, said the organisation could impose a “no-fly zone” together with the African Union if fighting continued. “The Arab League will not stand with its hands tied while the blood of the brotherly Libyan people is spilt,” he said.

Yusuf bin Alawi, the foreign minister of Oman, the scene of rare protests last week, called the league session in Cairo the first in a “new Arab renaissance”.

Qatar, known for its independent foreign policy, is the only Arab state to have called openly for Gaddafi to step down. The emir is thought to be involved in discreet attempts to persuade the Libyan leader to leave the country, perhaps in consultation with Venezuela’s Hugo Chávez.

Syria, another repressive regime, has been conspicuously silent about the Libyan events but has let it be known that President Bashar al-Assad spoke to Gaddafi. It is understood that Ahmad Gaddaf al-Dam, a cousin and confidant of the Libyan leader, was refused asylum in Damascus and was forced to return to Egypt.

“The Arabs are lost,” said Ahmad Asfahani, a commentator with the al-Hayat newspaper. “Really they don’t know how to deal with what is happening.”

In the conservative heartlands of the Gulf, concern is focused less on Libya than on the island state of Bahrain, where seven people died in protests that triggered concessions and a cabinet reshuffle by King Hamad but left uncertainty about the future, close to Saudi Arabia and its sensitive Shia eastern provinces.

Plans to help Bahrain and Oman were revealed by the Kuwaiti newspaper al-Qabas, which described a “Marshall-style plan” being drawn up by the six members of the Saudi-dominated Gulf Co-operation Council. It would help improve living conditions, create job opportunities and provide new homes, the paper said.

In the United Arab Emirates state media reported a plan to invest $1.6bn to improve infrastructure in less developed regions. The UAE, the second largest Arab economy, has escaped unrest so far, not least because its small local population enjoys one of the world’s highest economic outputs per capita, at over $47,000.

In Yemen, the poorest country in the Arab world, the opposition presented President Ali Abdullah Saleh with a road map for a smooth transition of power this year, offering him a graceful exit as street pressure grows for him to step down now. However, demonstrators objecting to dialogue with the regime and demanding Saleh that quit at once took to the streets again.