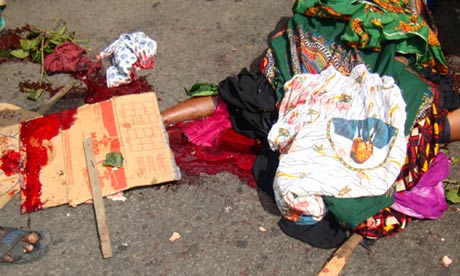 A picture allegedly shows the body of one of the seven women shot dead in Abobo, a working class neighborhood of Abidjan, Ivory Coast Photograph: AFP/Getty Images

Seven women have been massacred during a peaceful protest in Ivory Coast as the country appeared to stand on the brink of all-out civil war.

More than 200,000 people have fled, and the nation that was once a model of stability in west Africa is now experiencing bloodshed and economic meltdown.

The women’s demonstration became a scene of terror when security forces opened fire with machine guns in Abobo, a sprawling, impoverished suburb of the commercial capital, Abidjan, where some of the deadliest clashes have taken place during three months of crisis.

They were about to set off from a roundabout on a march to call on Laurent Gbagbo to step down as president. “Men in uniform drove up and started shooting randomly. Six women died on the spot,” Idrissa Diarrassouba told Reuters. A seventh died in hospital. Many others were wounded.

There was no official comment but a military source confirmed the shooting. “It was a blunder that we regret,” the source said, adding that security forces believe rebels sometimes hide among civilians. “It is unfortunate.”

The UN says at least 365 people have died since November’s election, nearly all supporters of Alassane Ouattara, the internationally recognised winner. The UN said, just after the shooting, that more than 26 people were killed in the past 24 hours in Abobo, where most people come from the country’s north.

Multiple delegations of African leaders have come through Abidjan, but Gbagbo has rejected offers of amnesty and comfortable exile abroad if he leaves office.

The UN, other organisations and analysts warn that the country could return to civil war, as in 2002-3, which divided north and south. The International Crisis Group says war is imminent, with skirmishes in Abidjan and the west of the country between militias and army loyal to Gbagbo and the former insurgent New Forces, backing Outtara.

“You cannot predict what the outcome will be,” said Issaka Souare, a senior researcher for the Africa conflict prevention programme at South Africa’s Institute of Security Studies. “Civil war is not inevitable but it’s very likely, depending on how the mediation process will go.”

Outside military intervention may now be required, he added. That was first threatened in December by Ecowas, the west African regional bloc of 16 nations.

However, Adekeye Adebajo, the executive director of the Centre for Conflict Resolution at Cape Town University, warned: “You have a situation that could erupt into civil war. But it could also be a stalemate that continues, which makes Ouattara the big loser. The advantage Ivory Coast has over many other countries in this situation is the presence of 9,000 UN peacekeepers who could maintain the partition.”

He added: “There will be more clashes but the soldiers from both sides have not shown much stomach for war since 2002. It would take something dramatic for that to change. They each have half now, so why risk losing it all? And would the UN and French peacekeepers step aside? They have an obligation to maintain order.”

In Abobo Gbagbo’s forces have been fighting an armed group that emerged last week known as the Liberation Movement of the Population of Abobo-Anyama (the adjacent neighbourhood). The Liberation Movement said its attacks followed weeks of police brutality, arbitrary arrests and abductions of Ouattara supporters. Abobo has also been terrorised for weeks by masked militias and residents believe the armed group consists of rebels from the New Forces movement that has ruled the northern half of the country since 2002, as well as army soldiers who have switched sides. The group now controls a large part of Abobo and Anyama suburbs.

Aid workers and journalists have not been able to get into the area since fighting began last week.

Residents also say that some streets were littered with corpses, which they have had to burn to ward off disease.

“Last week, after the overnight fighting died down, I ventured out to charge my mobile phone and I saw nine bodies,” said Seydou Koné, who escaped with his wife and two children during the weekend. “I think they were security forces, but in some cases it was hard to tell.”

He saw “many more” bodies later that week, including two policemen, killed because they were suspected of spying for the Gbagbo regime.

More than 200,000 people have fled Adibjan’s northern suburbs, according to the UN Operation in Ivory Coast. Its spokesman, Hamadoun Touré, said the armed group is preventing people from leaving. “Entire families, blocked in public places, in churches and parishes, are living in fear and without water or electricity.”

In another area of Abidjan, pro-Gbagbo militias hung a tyre around the neck of a “foreigner”, what they call people from the north, poured petrol over him and set him alight. Similar incidents have taken place in the interior of the country, with at least six others killed by militias, the Ouattara government said.

These brutal attacks on people who are seen as “foreigners” or “rebels” are unprecedented in Ivory Coast, and have sparked widespread fears of an ethnically motivated civil war.

Meanwhile, the UN has apologised to Belarus for falsely claiming that it broke an arms embargo against Ivory Coast. Alain le Roy, its peacekeeping chief, admitted the erroneous report was a “very bad incident for us”.