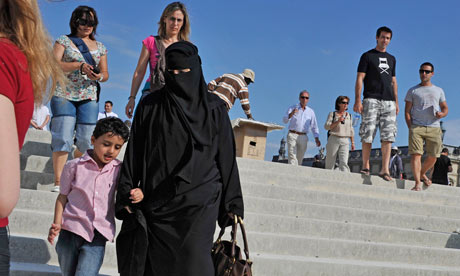 The niqab ban, proposed by a communist MP but later championed by Nicolas Sarkozy and his rightwing ruling UMP party, has reopened the long-running debate over how the country with Europe’s biggest Muslim community integrates Islam into its secular republic.

The timing of the new law risks plunging France even further into an identity crisis. Sarkozy, desperate to secure the far-right electorate in next year’s presidential election, is under fire for deliberately stigmatising France’s Muslim population to win votes. He has ordered a nationwide debate on Islam’s place in secular France, briefing journalists he wants no halal food options in school canteens, no prayers outside and no minarets. He was defiant on Thursday, giving a speech lauding the “Christian heritage of France”.

Sarkozy’s move comes as Marine Le Pen, the new leader of the Front National, has seen her party’s popularity soar to unprecedented levels since she compared Muslims praying in the streets outside overcrowded mosques to the Nazi occupation of France. She also criticised halal-only fast food restaurants.

One indication of the mood of unease in France is local authorities taking steps to ban proposed “pork and wine aperitifs” by rightwingers deliberately staged near Muslim places of worship, including a “rosé wine and porchetta” evening to be held near a Muslim place of prayer in Nice on Friday night.

The prime minister, François Fillon, this week distanced himself from Sarkozy’s debate on Islam and said he was opposed to the “stigmatisation of Muslims”. To get around accusations that the niqab ban unfairly prejudices French Muslims, his office has been tying itself in semantic knots over the law.

It is now officially called the bill against “covering one’s face in public places”, which Fillon deems an issue of public order and gender equality, not secularism. This means wearing any face covering, including balaclavas, hoodies or masks, is against the new law. So the state has had to seek special exemptions for motorcycle helmets or sports equipment such as fencing masks. There are also exemptions for people appearing in parades, celebrations or places of worship. After a teacher was convicted for trying to rip a face veil from an Emirati tourist in a shop, the law states public officials cannot force women to remove their niqabs in the street but must instead call the police or gendarmes.

Fillon argued that face coverings put those who wear them “in a situation of exclusion and inferiority incompatible with the principles of liberty, equality and human dignity affirmed by the French republic.”

But the immigration historian Patrick Weil has warned that the law is open to challenge from the European court of human rights. He said the battle to stop women wearing niqab did not justify that “a woman who believes that her God orders her to wear it should be stopped from going out to buy food to feed herself, or from going to see a doctor”.

A tiny minority of women in France wear full niqab, far fewer than in the UK: Muslim groups estimate only a few hundred out of France’s more than 5 million Muslim population.

In 2004, after another heated national debate, France banned headscarves and all conspicuous religious symbols from state schools. But since the niqab ban was voted in by parliament, standard headscarves have also become a bone of contention in high-profile cases.

A worker in a private creche went to court and lost after she claimed she was fired for refusing to take off her headscarf. The education minister insisted that mothers in headscarves should not be allowed to accompany children on school outings. One mother banned from escorting her son’s primary school class for wearing a simple head-covering said: “I’m French, not a fanatic, I just want to be able to practise my religion without being ostracised.”