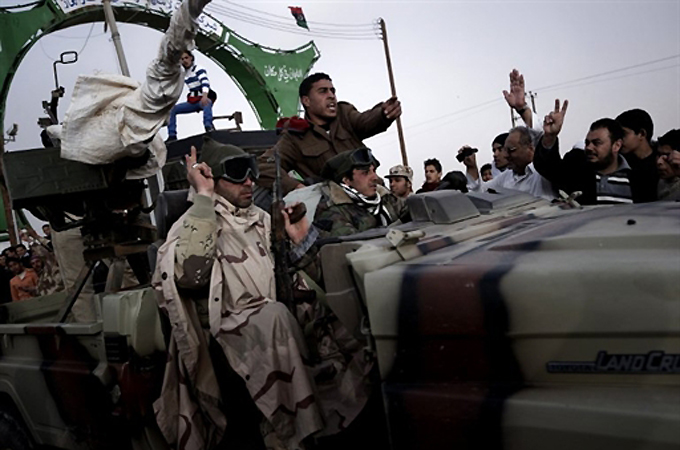 At least 30 civilians have been killed after security forces loyal to Muammar Gaddafi, Libyan leader, attempted to retake the rebel-held town of Az Zawiyah, near the capital Tripoli, that has for days been defying his rule, witnesses have said.

The rebellion in Az Zawiyah – the closest rebel-held territory to the capital and also the site of an oil refinery – has been an embarassment to the Libyan authorities who are trying to show they control at least the west of the country.

Eastern regions of the country, around the city of Benghazi, have already fallen out of Gaddafi’s control after a popular revolt against his four decades of rule.

“I have been to hospital less than 15 minutes ago. Dozens were killed and more were wounded,” Mohamed, a Zawiyah resident, told the Reuters news agency.

“We have counted 30 dead civilians. The hospital was full. They could not find space for the casualties.

“We receive updates from the hospital and they say the number of casualties is rising.”

Another resident, Ibrahim, said between 40 and 50 people were killed in the clashes.

Their accounts could not be independently verified because reporters’ movements in Libya are restricted.

Anita McNaught, Al Jazeera’s correspondent in Tripoli, said a source close to the Libyan government had told her that Az Zawiyah “has been retaken by government forces”.

A rebel leader in Az Zawiyah was also killed in the clashes on Friday.

“Many people were killed in Harsha, which is now occupied by them,” Youssef Shagan, a rebel spokesman, told the Reuters news agency, referring to a small town just outside Az Zawiyah.

“They shot at civilians. We still control [Az Zawiyah’s] central square. They are four to five kilometers away. Our army commander has been killed in Harsha. We have appointed a new one.”

Friday’s violence in Az Zawiyah comes amid more reports of battles between loyalist forces and anti-Gaddafi fighters in several other strategic cities.

Heavy shelling and machine gun fire has been reported near Ras Lanuf, the eastern oil port located 660km from Tripoli.

Reuters said rebels fired a sustained barrage of mortar bombs and rockets at a military base in Ras Lanuf on Friday, which was met with artillery fire from the army.

“There are lots of flames, thuds and bangs. There is the wailing of sirens and puffs of smoke in the air,” a Reuters correspondent said.

The AFP news agency said at least four people were killed in the fighting.

Rebels had vowed “victory or death” as they headed towards the oil terminal, with reports that trucks of armed anti-Gaddafi fighters are heading towards the area.

Government forces are said to be battling to regain control of rebel-held towns close to Tripoli, trying to create a buffer zone around what is still Gaddafi’s seat of power.

Earlier, opposition fighters said Libyan forces carried out an air strike near a military base on the western outskirts of Ajdabiya, a town captured by the opposition, but said there was no casualties or damage.

Witnesses said a bomb was dropped on Friday and other rebel fighters say two rockets were fired at the base near the eastern town, but also missed.

But Hoda Abdel-Hamid, Al Jazeera’s correspondent in the eastern city of Benghazi, said she had heard reports that volunteers going to the front line of fighting were feeling “very vulnerable from the air”.

Opposition protesters in the country’s east have set up advanced positions 50km west of Brega, which lies in between Gaddafi’s hometown of Sirte and the opposition-held port of Benghazi, and sits near ethnic fault lines between tribes loyal to the leader.

Rebel fighters, who are poorly equipped and not well trained, are also said to have pushed further west on Friday, heading along the main coastal road out of Uqayla, a village 280km from Benghazi.