– Big Brother Britain Has Grown Out of All Proportion

Research shows 1.85m machines across Britain, most of them indoors and privately operated 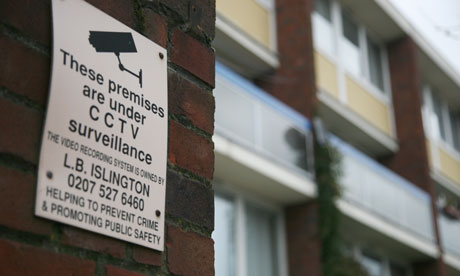 A familiar sight: a poster on a block of flats warning of CCTV surveillance. Photograph: Susan Swindells for the Guardian

The UK is being watched by a network of 1.85m CCTV cameras, the vast majority of which are run by private companies, according to the only large-scale audit of surveillance cameras ever conducted.

The study, which involved police community support officers (PCSOs) physically counting virtually every camera in Cheshire, provides the first reliable estimate of how saturated with CCTV the UK has become.

Details of the research come in the week that a government consultation document proposed a voluntary code of practice for public CCTV systems, but left private cameras largely unregulated.

It has taken more than two years for Cheshire PCSOs to interview the owners of every premises in the county. During the ongoing project they counted 12,333 cameras, according to an account of the research published in the magazine CCTV Image.

The majority of these were inside premises, rather than facing the street, and only a relatively small number of Cheshire’s cameras – 504 – were run by public authorities.

The data from Cheshire was then extrapolated to the UK, taking into account rural and urban differences. The addition of the number of publicly-owned CCTV, and cameras on transport networks, brought the total estimate to 1,853,681. This translates to one camera for every 32 UK citizens.

Cheshire’s deputy chief constable, Graeme Gerrard, said the data undermined more sensational estimates, such as the widely-repeated but dubious claim that the average Briton passes under 300 cameras a day.

Another questionable estimate that received widespread coverage – including in Home Office literature – was of 4.2m cameras in the UK. The methodology behind this claim was also dubious as it derived from a 2002 study that extrapolated from the number of cameras spotted on two streets in Wandsworth in London.

“The figure of 1.85m is still a significant number of CCTV cameras,” said Gerrard, the national lead on CCTV for the Association of Chief Police Officers. “I’m not saying for a minute that this doesn’t mean that we don’t have a lot of cameras.”

He said he was particularly surprised when he came across other research, showing the London tube network was covered by as many as 11,000 cameras.

Gerrard, who co-wrote the research with his constabulary’s mapping manager, Richard Thompson, said that without comparable research from elsewhere in the world, campaigners could not reliably claim that the UK is the “most watched” society in the world.

But he said he hoped the research would form the basis of a more informed debate. “It doesn’t matter if it is 4.2m or 1.85m. There are still lots of cameras in the UK and there are still issues that we have to be conscious about in terms of how they are used.”

Isabella Sankey, director of policy at the campaign group Liberty, echoed the wider concern. “Who cares if there is one camera or 10 on their street if that one camera is pointing into your living room.

“Concerns about CCTV are not a simple numbers game; what’s required is proper legal regulation and proportionate use.”