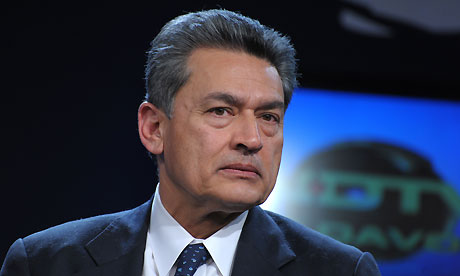 Moments after hanging up, U.S. authorities claim, one Goldman director called a friend who headed a hedge fund. Within minutes, the hedge fund manager had snapped up thousands of Goldman shares, which soared after the news became public.

The episode is at the centre of explosive allegations revealed on Tuesday by the U.S. Securities and Exchange Commission accusing Rajat Gupta, a former Goldman director who previously led consulting firm McKinsey & Co., of participating in a vast illegal insider trading scheme.

Mr. Gupta allegedly passed confidential information gleaned from two board memberships – at Goldman and Procter & Gamble Co. (PG-N62.550.140.22%) – to Raj Rajaratnam, the founder of hedge fund Galleon Group, whose trial on criminal insider-trading charges is scheduled to begin next week in New York.

The accusations will send shock waves through boardrooms in the U.S., where Mr. Gupta had a reputation as a trusted counsellor to the biggest names in corporate America. In his native India, Mr. Gupta is a business hero, one of the first people born in the country to rise to the top of a major multinational company.

Mr. Gupta “was honoured with the highest trust of leading public companies, and he betrayed that trust by disclosing their most sensitive and valuable secrets,” said Robert Khuzami, director of the SEC’s Division of Enforcement.

No allegations have been proven. Gary Naftalis, a lawyer for Mr. Gupta, said the SEC’s accusations are “totally baseless.”

“Mr. Gupta has done nothing wrong and is confident that these unfounded allegations will be rejected by any fair and impartial fact finder,” he said in a statement.

Mr. Gupta, 62, is not facing criminal charges. Instead, the SEC made its allegations in an order that directs an administrative panel to weigh the accusations and, if applicable, levy penalties.

Controversy has dogged Mr. Gupta for months, but until Tuesday, U.S. authorities had made no formal accusations against him. In 2010, The Wall Street Journal reported that Mr. Gupta was under investigation, part of a sprawling probe into Galleon Group that has made extensive use of wiretapped conversations. Nineteen people have already pleaded guilty to criminal charges. Mr. Rajaratnam maintains his innocence.

At Goldman’s annual meeting last year, Mr. Gupta did not seek re-election to the board of directors. On Tuesday, Mr. Gupta voluntarily resigned from the board of Procter & Gamble, the company said. He also sits on the boards of AMR Corp., the parent company of American Airlines Inc., audio equipment giant Harman International Industries Inc., and outsourcing firm Genpact.

“This is what is known as a board’s worst nightmare,” says Charles Elson, an expert on corporate governance and law professor at the University of Delaware. Mr. Elson noted that directors only depart in two ways – either by resigning or getting forced out in a shareholder vote.

Born in Calcutta, Mr. Gupta attended Harvard Business School and joined McKinsey in 1973. He spent the next 34 years at the firm, nine of them in its top job, advising corporate America on its most critical decisions. “I think of him like Thomas Aquinas,” A.G. Lafley, the former chief executive of Procter & Gamble, told Fortune Magazine last year. “He wasn’t just asking what we should do. He was helping us figure out the right thing to do.”

The SEC alleges that Mr. Gupta passed confidential information to Mr. Rajaratnam over the phone at several points from late 2008 to early 2009, which led to illicit gains of $15-million (U.S.) for Galleon hedge funds.

On September 23, immediately after the Goldman board approved Warren Buffett’s investment in the company, Mr. Gupta called Mr. Rajaratnam, the SEC said. With just minutes to go before the stock markets closed, Mr. Rajaratnam had his funds buy 170,000 shares of Goldman. On September 24, the stock jumped 6.4 per cent. Mr. Rajaratnam allegedly then sold the position he took a day earlier, netting profits of nearly $1-million.

A month later, the SEC said, Mr. Gupta participated in a Goldman board meeting via telephone during which the firm’s senior executives warned that it was heading for a historic loss in the quarter then under way.

Less than a minute after disconnecting from the call, Mr. Gupta dialled Mr. Rajaratnam, the SEC said. The next day, Mr. Rajaratnam purportedly had his funds start selling their Goldman shares, explaining to an unnamed person that he had heard from a member of the Goldman board that the firm would register a loss instead of the gain expected by analysts. The trades allowed Galleon to avoid losses of over $3-million, U.S. authorities said.

Mr. Gupta’s lawyer noted in his statement that there is “no allegation that Mr. Gupta traded in any of these securities or shared in any profits as part of any quid pro quo … negating any motive to deviate from a lifetime of honesty and integrity.”