– Nouriel Roubini: “When Governments Reach the Point Where They Are Borrowing to Pay the Interest on Their Borrowing They Are … Running a Ponzi Scheme”

– Markopolos: I gift wrapped and delivered the largest Ponzi scheme in history to the SEC

Bernard Madoff, the disgraced financier, accused the investors whose money he lost in a £40 billion Wall Street investment fund of being greedy. 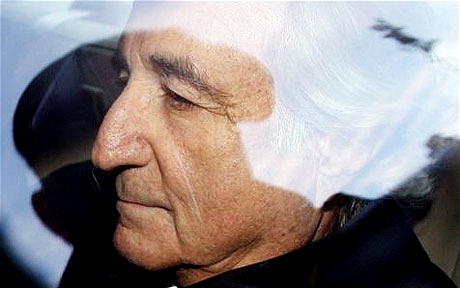 ‘Everyone was greedy,’ Bernard Madoff told New York magazine. ‘I just went along’

Madoff, who is serving a 150-year prison sentence, also rubbished the financial reforms introduced by the US to prevent future corruption and claimed: “The whole government is a Ponzi scheme”.

The 72-year-old admitted in 2009 that his prestigious investment house was a Ponzi scheme, in which investors were paid returns from money put in by later investors, who were also promised big profits.

In a series of interviews from his jail in North Carolina, Madoff repeatedly claimed that he was not attempting to excuse his actions, while also appearing to do just that.

“Everyone was greedy,” he told New York magazine. “I just went along.”

He added: “These banks and these funds had to know there were problems”.

“It was a nightmare for me,” he said. “Even the regulators felt sorry for me … They said ‘how did you live with this? Not being able to tell anybody?'”

Madoff also alleged that the victims of his £40 billion fraud “probably would’ve lost all that money in the market” if they’d invested elsewhere.

He dismissed suggestions that he had left investors in financial ruin.

“None of my clients, even if they lost every penny they put in there, can plead poverty,” he said.

“Now if you listen to [them], they’re living out of dumpsters and they don’t have any money and I’m sure it’s a traumatic experience to some, but I made a lot of money for people.”

Madoff, whose 46-year-old son Mark hanged himself last year, again insisted that his wife and children had not known about the fraud.

“I destroyed our family,” he said.