Reducing the world population by 6 Billion and the New World Order is on the elite agenda. 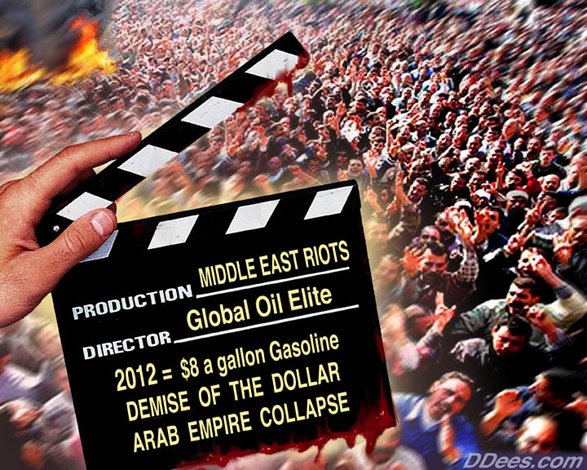 According to the elite’s own admission, Corporation Earth is bankrupt and bloated and must be downsized.  In other words, that which mathematically cannot continue, will not continue; and it’s time to cut the fat.

Banksters and the oil cartel appear to be taking the lead to bring about the final phase of a long-range plan.  Wall Street is driving up prices for essentials like food and energy to the breaking point, which is shaking every nation on earth to its core.  The effect of such manipulation seems destined to lead toward a severe reduction in numbers of the human population, and a tightening of control over those who remain.

Even strong developing nations with economic surpluses like China and India are faltering in the face of such manipulated increases. Regions ill-equipped to cope with food shortages, but are oil-rich, like Northern Africa and the Middle East are quickly destabilizing as a result.  Meanwhile, America has a record amount of citizens on food assistance amidst worsening unemployment.
This economic wrecking ball is having a devastating global effect.

The oil and Wall Street powers seem satisfied to allow the civil unrest to spread in order to feed their greed for higher oil prices and resulting control.  Surely they recognize that higher oil prices will suck the remaining wealth out of the poor and middle classes around the world.  This scenario will obviously cause starvation, illness, and other life-shortening effects, as increasing numbers join the ranks of the poor . . . and the poor have no where else to go.

It appears that there is no stopping this scenario unless the human tribe finds solidarity of purpose in defeating the very system that has offered only two horrible scenarios.  Incidentally, the escalating global unrest is the fallout, which may have triggered such revolutionary times. The summer and autumn austerity revolts throughout Europe now have spread to oppressed Arab countries, and are being hinted at in the streets of Wisconsin and elsewhere in a formerly asleep America.

We must assume, however, that the ruling class has contingency plans for dealing with organic protests resulting from their economic hitman schemes. The dilemma for those in the human tribe who understand the purpose of these manufactured events (culling and control) is to determine whether a slow economic destruction is actually any better than rapid collapse for creating a more just and free society.

Many will say there may still be more than two ways forward if enough people wake up quickly enough, but the elite control the tap of resources (life) and they will simply turn off the switch if they are truly threatened by other possibilities.  Incidentally, it’s this very tap of money, oil, and food that is already being restricted to create this depression cycle.  Thus, they are certainly capable of a complete switch-off that would result in a rapid collapse of resource delivery systems, while the world is becoming incrementally poorer due to their economic policy decisions.

So what is the endgame?

Complete collapse might cause immediate solidarity in communities out of sheer necessity to cooperate, which appears to present an opportunity to start over and rebuild at the local level during the period when the centralized control system will be in crisis mode. Yet, a catastrophic collapse will indeed accomplish the controllers’ goal of rapid depopulation through starvation and civil unrest, as vital goods will likely disappear almost immediately, especially from mega-cities.

It seems that a slow demolition approach allows more time to educate, prepare, and propose a better way forward for society.  In turn, it gives the controllers more time to situate their chess pieces and set up the high-tech control grid.

Indeed, there will be pain and suffering in both inevitable scenarios.  For those on the side of humanity, a slow demolition might be preferable, as truth will always win if given enough time to reach those who are open to it.  And yet, nothing is more likely to wake people up en masse than a total shutdown.

Regardless, we should seize the opportunity today to prepare people for these inevitable realities, and join forces to propose a new way forward.

Please tell us your thoughts on surviving the economic collapse and ideas for rebuilding a better society when the control system falls . . . .

1 thought on “Turning Off the Tap: Population Reduction Through Designed Economic Collapse”