African mercenaries hired by the Gaddafi regime to kill Libyan protesters would be immune from prosecution for war crimes due to a clause in this weekend’s UN resolution that was demanded by the United States. 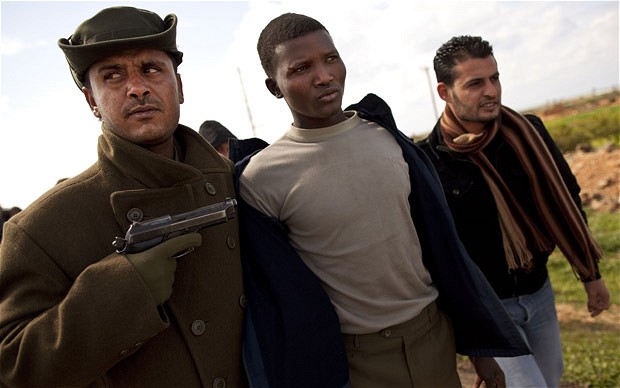 Libyan militia members from the forces against Gadhafi escort a man who they suspect to be a mercenary Photo: AP

The UN Security Council agreed on Saturday evening to freeze international assets belonging to the Gaddafis and their key aides, to ban them from travelling and to block all arms sales to Tripoli. It also called for the International Criminal Court (ICC) to investigate the killings of demonstrators.

This inquiry could lead to senior Libyan ministers and officials being indicted to stand trial for crimes against humanity at The Hague and being given lengthy prison sentences.

But it has been widely alleged that many of the attacks were in fact carried out by foreign mercenaries hired by Colonel Gaddafi. And the US insisted that the UN resolution was worded so that no one from an outside country that is not a member of the ICC could be prosecuted for their actions in Libya.

This means that mercenaries from countries such as Algeria, Ethiopia and Tunisia – which have all been named by rebel Libyan diplomats to the UN as being among the countries involved – would escape prosecution even if they were captured, because their nations are not members of the court.

The move was seen as an attempt to prevent a precedent that could see Americans prosecuted by the ICC for alleged crimes in other conflicts. While the US was once among the signatories to the court, George W. Bush withdrew from it in 2002 and declared that it did not have power over Washington.

The key paragraph said that anyone from a non-ICC country alleged to have committed crimes in Libya would “be subject to the exclusive jurisdiction” of their own country. It was inserted despite Susan Rice, the US ambassador to the UN, saying that all those “who slaughter civilians” would “be held personally accountable”.

Speaking to reporters outside the council chamber, Gerard Araud, the French UN ambassador, described the paragraph as “a red line for the United States”, meaning American diplomats had been ordered by their bosses in Washington to secure it. “It was a deal-breaker, and that’s the reason we accepted this text to have the unanimity of the council,” said Mr Araud.

Carne Ross, a former British diplomat to the UN, said on Sunday that a mechanism was needed urgently to allow Libyans to inform the ICC who should be charged with crimes against their compatriots.

“With no diplomats in situ, I don’t see how outside states can know who these people might be,” Mr Ross wrote on his blog. “Instead, how about providing a channel for Libyans on the ground observing the crimes of the regime to nominate people?”

Mr Ross, who now runs a non-profit diplomatic advisory group, suggested that international authorities set up “an email address where Libyans can nominate people for sanctions” or even open a online “Wiki” on which Libyans could build a list of perpetrators.