HSBC said profits nearly tripled last year to $19bn (£12bn) pre-tax – the highest earnings generated by a British bank since the start of the financial crisis. 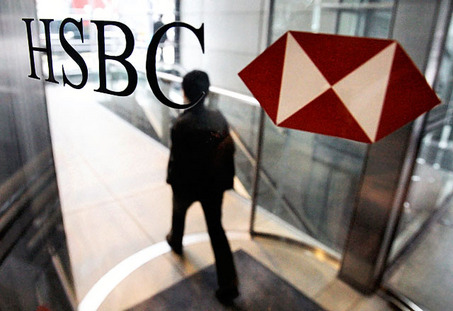 Europe’s biggest bank said it had made a good start to the year but despite the strong figures the shares fell 3pc.

Analysts said the profits were about $1bn lower than expected. Sentiment was also affected a cut in the bank’s long-term return on equity target to 12pc-15pc from 15pc-19pc to reflect the tougher capital requirements for banks and global economic uncertainty.

“There’s disappointment because people got very, very excited about this stock … and the first thing that happens they’ve taken their return target down,” said Simon Maughan, analyst at MF Global.

The bank also announced the aggregate salaries and collective bonus pool of its 280 top staff globally – more than nine months before new rules imposed by the Financial Services Authority (FSA) require it to do so.

Stuart Gulliver, the chief executive, saw his total compensation drop nearly 40pc to £6.17m last year, down from £9.8m in 2009, according to the bank’s annual report released alongside the full-year results.

According to the figures, every customer group and region – including North America – was profitable in 2010 for the first time since 2006.

The bank, which unlike Lloyds and RBS receiving no direct government aid to survive the financial crisis, made profits of $7.1bn in 2009.

Fifty percent of earnings came from Global Banking and Markets, where profits slipped to $9.54bn from $10.5bn. Profits from Personal Financial Services turned around from a $2.1bn loss in 2009 to a profit of $3.52bn. Global private banking and commercial banking posted profits of £1.05bn and $6.09bn respectively.

HSBC also strengthened its capital base during 2010, with its core Tier 1 ratio – a key ratio look at by regulators – rising from 9.4pc to 10.5pc.

In Britain, lending to businesses increased 3pc to £39.5bn. New loans to small and mid-sized businesses jumped 19pc to £2.4bn.

HSBC said helped 2,400 customers a week start up new businesses in the UK but total lending was down 1.6pc as borrowers paid off loans.

A final dividend of 12 cents a share will be payable on May 5, up from 10 cents last year. This takes the full-year payout to 36 cents.

The bank said it has been closely watching events unfold in parts of the Middle East and North Africa.

“Our primary concern is for the security of our 12,000 staff across the region and we continue to work to ensure their safety,” HSBC said.

The bank, which has operated in the Middle East for more than 50 years, said it had activated “robust continuity plans so that we can also stay open for business and support the needs of our customers”.

“We also believe that the region’s economies have a number of structural strengths which leave us positive on the longer-term outlook.”

HSBC expects the high oil price to create volatility in the global economy in the short term. It also sees a risk of currency wars and trade tensions as faster-growing nations seek to limit the effect of Western monetary policy on their own economies.