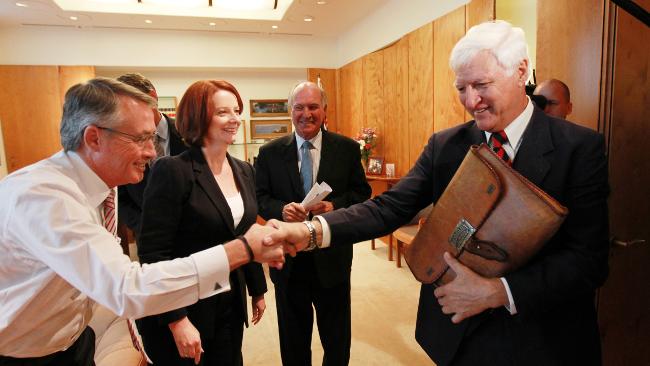 All this will, hopefully, deter companies from releasing carbon into the environment. Once the price of carbon begins rising, polluters will start cleaning up their operations by investing in alternative technologies, and so on. That’s the theory.

The reality, as we have learnt in recent years, is that our federal Labor Government struggles with simple, let alone complex, administrative tasks.

Fraud and waste were found in the Building the Education Revolution and home-insulation schemes, at levels that indicated a lack of planning and a disturbingly carefree approach to processes like tendering and oversight.

That’s a warning bell for the future emissions trading scheme.

Is this Government capable of administering a hugely complex and difficult idea?

Can Julia Gillard knock enough Green heads together to create something that makes sense – for the environment, and for the industries we need to keep our economy running?

And then there are administrative questions: How many bureaucrats will we need to run this scheme?

Who will decide how many carbon permits each polluter gets?

Who will oversee the decision-maker?

Which court will decide the inevitable legal appeals?

Who will stop the spivs and profiteers from banks and stockbroking firms making a fortune from this scheme, at the expense of ordinary Australians?

Then the really big questions for families arise: which prices will rise?

Will milk and bread go up?

Who will stop supermarkets, petrol companies, trucking firms and airlines from using the carbon scheme to jack up their prices at the expense of consumers?

And Ms Gillard has a frightening array of special-interest groups to satisfy.

Independents Rob Oakeshott and Tony Windsor, both representing largely National Party-leaning constituencies, will have to answer to the farmers, miners and families in their seats when prices begin to rise.

The man charged with handling this tough issue is federal Minister for Climate Change and Energy Efficiency Greg Combet.

Some business figures are already wary of Mr Combet because of his background in trade unions and they are preparing for a fight that will make last year’s mining-tax battle look like tiddlywinks.

Mr Combet is well known to harbour ambitions for the prime ministership.

If that is true, this is going to be his big test: can he help Ms Gillard design, negotiate and sell this scheme? The fate of the Government, not to mention the environment and the economy, may depend on it.

– Arctic Cold Closes Schools, Suspends Some Rail Service, in US Northeast – 36 Degrees Below Zero In Part Of Upstate New York

1 thought on “Carbon Scam Tax Will Change Our World”