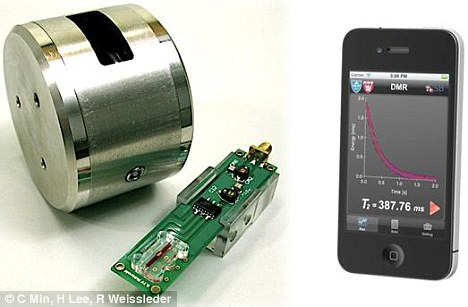 Cancer breakthrough: Researchers have developed a smartphone-based system that is up to 100 per cent accurate at telling the difference between benign tumours and their malignant counterparts

A mobile phone that spots cancer – and is more accurate than the techniques routinely used in hospitals – has been developed by scientists.

The smartphone-based system is up to 100 per cent accurate at telling the difference between benign tumours and their malignant counterparts.

It also takes just an hour to make the diagnosis, meaning patients don’t have to spend days or weeks anxiously waiting for test results.

The U.S. researchers said the gadget could ‘transform cancer care’ by also making it easier for doctors to track how well drugs are fighting the disease in a patient’s body.

In initial tests, it was 88 per cent accurate in distinguishing cancerous stomach tumours from benign growths.

This compares with an average accurate of 84 per cent for the gold standard technique which involves using chemicals that stain cancerous cells and show up under a microscope.

In future, the smartphone system could be adapted to spot brain, skin and ovarian cancers quickly and accurately.

The tiny amount of tissue needed – one thousandth of a millilitre – would also spare patients the pain and risk of having repeatedly having pieces of their growth cut away for testing.

And with the most expensive piece of equipment costing just £60 or so, the system would be cheap to run.

The device, developed at Massachusetts General Hospital in Boston, consists of a smartphone connected to a miniature MRI machine.

In tests, patients with suspected stomach cancer had tiny samples of their growths removed using a fine needle.

An app – or application – on a smartphone computes the results and provides doctors with a read-out.

Researcher Dr Cesar Castro said: ‘The smartphone app is an easy-to-use interface that both controls the desk phone-sized apparatus as well as receives the data.

‘We must emphasise that this is a quantitative readout with no room for subjectivity or manipulation by whoever is processing.

‘This is important – whether the results are generated in Boston, London, or Lima the data remains the data. It also allows for apples to apples comparisons.’

Testing on larger groups of patients is needed, but if all goes well, the system could be in widespread use in hospitals in as little as three years. It would not be suitable for home use.

A separate device, also detailed in the latest edition of Science Translational Medicine, could take the worry out of suspicious moles.

Researchers at Duke University in North Carolina have used lasers to probe the insides of moles and detect cancerous changes in their pigment.

If more accurate than existing tests, it could spare thousands of patients unnecessary surgery.