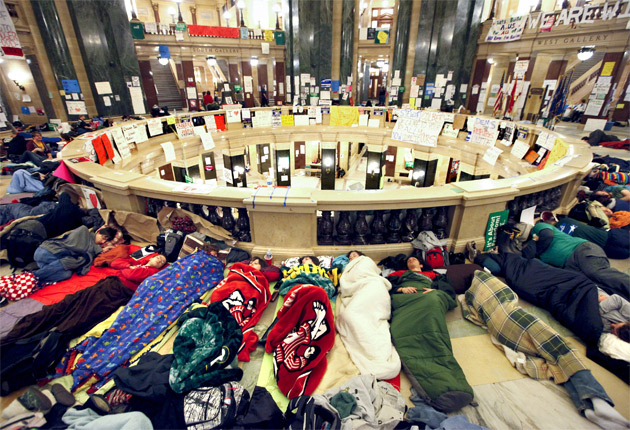 The showdown over union rights that has paralysed politics in Wisconsin is spreading to other American states, threatening to trigger a national “workers war” of a kind not seen since Ronald Reagan fired air traffic controllers en masse 30 years ago.

The State Capitol in Madison, Wisconsin, was overflowing for the 10th day yesterday by protesters infuriated by legislation being pushed by the newly elected Governor Scott Walker which would strip most collective-bargaining rights from state workers, including teachers and librarians. Governor Walker is serving notice he will begin mass layoffs next week unless Democrats who have fled the state to avoid voting on the law return soon.

In signs that the Wisconsin fever might be contagious, similar legislation has surfaced in at least two other states – Indiana and Ohio – while strong support for Mr Walker has been expressed elsewhere, including by Chris Christie, the pugnacious and popular Governor of New Jersey.

Just as in Wisconsin, a number of Indiana Democrats have now fled across state lines in hopes of sabotaging attempts to pass laws they deem as anti-union, while in Ohio’s capital, Columbus, there have also been huge pro-union demonstrations.

The challenge to union rights that have endured since the New Deal era comes in the wake of significant advances by Republicans at the state level in last November’s elections. Wisconsin, Indiana and Ohio all saw their statehouses switch to Republican control, and the party captured governorships in Wisconsin and Ohio.

Mr Walker and his allies insist that the budget deficits that are besetting his and other states leave them with no option but to tackle the entitlements that public-service unions have won over the decades for their members. Opponents counter that they are using the budget crisis as a cover from an all-out assault to cripple the unions – and the President Barack Obama and his Democrats in seeking re-election next year because they rely so heavily on union money and union organising.

“It goes to the very core of the labour movement’s ability to be viable,” said Robert Bruno, director of the labour education program at the University of Illinois at Chicago. “You’re talking about a national conflict between corporate America and its conservative allies and the New Deal coalition.”

With Mr Walker showing no willingness to compromise – the Democrat lawmakers will presumably return eventually – some observers are comparing what he has started to the shock that was delivered to the American union movement by Mr Reagan with his sacking of striking air controllers in August 1981. Yet opponents of Mr Walker were taking some solace last night from a Gallup/USA Today poll showing that nationally only 33 per cent of Americans would support the kind of legislation he is trying to pass, while 61 per cent said they would oppose similar laws if they were proposed in their own state.

Republicans like Newt Gingrich, who may run for president next year, are speaking up for Mr Walker. But others in the party were tackling the issue more gingerly. The new Republican Governor of Florida, Rick Scott, offered support for collective bargaining. In Indiana, Governor Mitch Daniels, another possible presidential candidate for 2012, surprised conservatives by asking that state Republicans postpone pushing any law to crimp union powers.

The law in question would end the ability of public workers to negotiate collectively for anything except salaries.