Republican is duped by a caller pretending to be one of the rightwing Koch brothers, some of his wealthiest backers 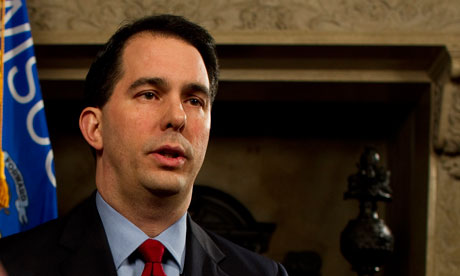 The Republican governor at the centre of the union-busting protests in the US has been embarrassed by a prank call that he believed was from one of his billionaire backers.

On the recording of the call, which has been released online, the Republican governor of Wisconsin Scott Walker tells a caller impersonating one of the rightwing Koch brothers that he is looking forward to flying to California to celebrate with them once the battle with the unions was won, and jokes about taking a baseball bat to slug Democratic leaders.

Walker is under siege in his office in the state capitol building in Madison, Wisconsin, in a backlash against his proposed legislation to remove unions’ right to collective bargaining and cut public sector workers’ pay.

Ian Murphy, who calls in pretending to be David Koch, suggests planting troublemakers among the protesters, who have been peaceful through 11 successive days of demonstrations. Walker says he has thought about doing that but decided against.

The prankster says: “I’ll tell you what Scott, once you crush these bastards, I’ll fly you out to Cali and really show you a good time.”

Walker replies: “Alright, that would be outstanding. Thanks for all the support and helping us move the cause forward. We appreciate it and we’re doing the just and right thing for the right reasons and it’s all about getting our freedoms back.”

The Koch brothers have given millions to the Americans for Prosperity campaign group, which has previously campaigned against Barack Obama’s healthcare reforms and tightening environmental controls. It is launching a major advertising campaign supporting Walker in Wisconsin.

Records for the state show that the brothers’ Koch Industries was one of the largest contributors to Walker’s election campaign.

The call can be heard on the Buffalo Beast website.