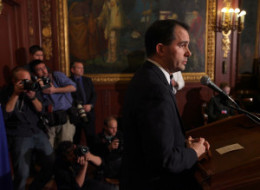 MADISON, WI – FEBRUARY 24: Wisconsin Governor Scott Walker speaks to the press outside his office at the state capital Building on February 24, 2011 in Madison, Wisconsin. Protestors have occupied the state capital building for the past ten days while the governor has tried to push through a bill that would restrict collective bargaining for most government workers. (Photo by Scott Olson/Getty Images)

MADISON, Wis. — (AP) The Wisconsin Assembly early Friday passed a bill that would strip most public workers of their collective bargaining rights – the first significant action on the new Republican governor’s plan.

The vote put an end to three straight days of punishing debate, but the political standoff over the bill is far from over. The measure now goes to the Senate, where minority Democrats have been missing for a week, preventing a vote in that chamber.

No one knows when – or if – the Senate Democrats will return from their hideout in Illinois. Republicans who control the chamber sent state troopers out looking for them at their homes on Thursday, but they turned up nothing.

Gov. Scott Walker’s proposal contains a number of provisions he says are designed to fill the state’s $137 million deficit and lay the groundwork for fixing a projected $3.6 billion shortfall in the upcoming 2011-13 budget. The flashpoint is language that would strip almost all public sector workers of their right to collectively bargain benefits and work conditions.

Democrats and unions see the measure as an attack on workers’ rights and an attempt to cripple union support for Democrats. Unions have said they would be willing to accept a provision that would increase workers’ contributions to their pensions and health care, provided they could still bargain collectively. But Walker has refused to compromise.

Tens of thousands of people have jammed the state Capitol since last week to protest, pounding on drums and chanting so loudly that police who are providing security have resorted to ear plugs. Hundreds have taken to sleeping in the building overnight, dragging in air mattresses and blankets.

While Senate Democrats fled to prevent a vote, Assembly Democrats had been filibustering.

After more than 60 hours in which Democrats threw out dozens of amendments and delivered rambling speeches, Republicans halted debate early Friday. In a matter of seconds, they had approved the bill. Only a few Democrats realized what was going on and managed to vote before the roll was closed.

Republicans refused to speak to reporters, though Majority Leader Scott Suder did issue a written statement.

“The vote we took wasn’t the easy thing to do, but it was the right thing to do,” Suder, R-Abbotsford, said.

The governor has said that if the bill does not pass by Friday, the state will miss a deadline to refinance $165 million of debt and will be forced to start issuing layoff notices next week. However, the deadline may not as strict as he says.

The nonpartisan Legislative Fiscal Bureau said earlier this week that the debt refinancing could be pushed back as late as Tuesday to achieve the savings Walker wants. Based on a similar refinancing in 2004, about two weeks are needed after the bill becomes law to complete the deal. That means if the bill is adopted by the middle of next week, the state can still meet a March 16 deadline, the Fiscal Bureau said.

Frustrated by the delay, Senate Republican Majority Leader Scott Fitzgerald, Jeff Fitzgerald’s brother, ordered state troopers to find the missing Democrats, but they came up empty. Wisconsin law doesn’t allow police to arrest the lawmakers, but Fitzgerald said he hoped the show of authority would have pressured them to return.

Erpenbach, who was in the Chicago area, said all 14 senators remained outside of Wisconsin.