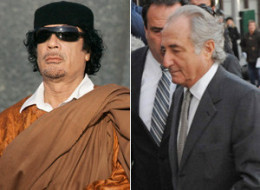 Even despotic leaders, it turns out, can make sound investment decisions.

Libyan leader Moamar Gadhafi turned down a chance to invest with Bernie Madoff and accused ponzi schemer Allen Stanford, according to a new diplomatic cable released by WikiLeaks. (The U.K.’s Telegraph has the full cable, dated January 28, 2010.)

In the cable, the head of the Libyan sovereign wealth fund, Mohamed Layas, claimed to control $32 billion in liquid assets, most of which was deposited at U.S. banks. Layas, according to the cable, was miffed at Libyan funds that were “mismanaged” by Lehman Brothers, the failed investment bank.

“Layas denied press reports that the LIA had invested USD 100 million with the infamous Allen Stanford. He said that he had personally written a letter to the “Financial Times” disputing the information, explaining that Stanford had approached the LIA in the middle of his crisis, offering a 7-8% share in his investment scheme, but Layas had refused. Layas also mentioned having been previously approached by Bernard Madoff about an investment opportunity, “but we did not accept.” On the contrary, LIA’s recent purchase of the Canadian Verenex oil company — after much controversy over the manner in which it was purchased and share price — was considered by Layas a “good deal.” LIA plans to operate Verenex jointly with the Libyan Investment and Development Corporation (LIDCO).

“In 2007, BP inked a multiyear production contract with Libya worth at least $900 million. It will explore for oil and gas both onshore and offshore in an area larger than Kuwait. Total spending by BP (BP) in Libya could reach as much as $20 billion over the next two decades.In 2008, ExxonMobil reentered the country, agreeing to invest $97 million to explore for oil and gas off the Libyan coast. It also paid a $72 million “signature bonus” to the state and agreed to pay $25 million to fund scholarship programs for Libyan citizens. The company is also expected to spend much more money in the country over the next decade.”

These deals, Sanati notes, could be come “worthless” if Gahadfi leaves the country.