– And Now: iPhone Confession App – ‘Forgive Me iPhone, For I Have Sinned’ 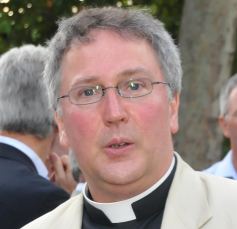 He is the best-known Catholic priest in ­Britain after Cardinal Cormac Murphy-O’Connor, the former Archbishop of Westminster.

So it was only fitting that Father Michael Seed, 53 — the man who helped convert former Prime ­Minister Tony Blair to Catholicism — should mark 25 years in the priesthood with a mass at the Church Of The Immaculate Conception in Mayfair earlier this month.

So far, so acceptable. I can reveal, however, that Seed also had a second, rather less devout celebration — a ­champagne-fuelled party with entertainment provided by ­transvestites dressed as nuns.

A close friend of Father Seed’s arranged the bash at the Pigalle Club — housed in a pink basement in London’s Piccadilly and known for racy floor shows — to mark the anniversary of the well-connected priest’s ordination into the Franciscan Friars Of The Atonement.

The 200 guests, many of them ­fellow clergymen, were startled to be greeted at the door by four burly transvestites, who took their coats.

Party-goers — who ranged from clerics from the Diocese of ­Westminster to millionaire benefactors who had flown in for the ­celebrations by private jet — were again taken aback when the ­transvestites appeared on stage later wearing nuns’ habits.

The 6ft ‘nuns’ proceeded to give what can only be described as a rather unsuitable cabaret act. ‘A female singer came on first. She sang rather good, classic jazz
songs, which was fine,’ says one wide-eyed reveller.

‘But then these transvestites came on stage. Mouths dropped. Quite a few people scuttled off to the bar in embarrassment.

‘Lots of champagne had flowed and I can’t recall the songs that the nuns sang. Needless to say, they weren’t singing vespers!’

His 2009 autobiography revealed he had met the Queen, how ­Miss Widdecombe organised an ­exorcism of the Home Office to rid the place of the evil aura left behind by Michael Howard, and how he often gets mistaken for a strippagram vicar.

Despite all this, Father Seed — who once acted as unofficial ­chaperone to Blair’s daughter, Kathryn — is currently setting up the ­Catholic Church’s committee on human dignity.