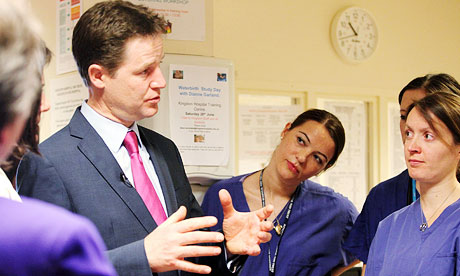 Some prominent examples of big job losses across the country include:

• East Lancashire Hospitals NHS Trust, which will cut 1,013 full-time equivalent staff from 2010-15, including almost 50 doctors and dental staff, as well as 270 nurses, midwives and health visitors

• University Hospital of North Staffordshire NHS Trust, which is forecasting a reduction of 1,349 full-time posts between 2011 and 2015 – 22.5% of its entire staff

• Up to 1,600 jobs are to go at the Heart of England NHS Trust, which runs hospitals covering east Birmingham, Solihull and south Staffordshire. Mark Newbold, the trust’s chief executive, told the Guardian he was committed to delivering “high-quality services” but he needed to make efficiency savings of 4% a year.

“The NHS, like many other sectors, is facing unprecedented changes,” he said.

False Economy, which is campaigning to stop public sector cuts, sent freedom of information requests across the NHS asking for “confirmed, proposed or potential” job losses over the next four years. Although it admits some of the responses are merely proposals, there is little doubt of the scale of the job losses.

Reports emerged that the Liberal Democrat energy secretary, Chris Huhne, is lobbying his Tory cabinet colleague Andrew Lansley against the long-proposed closure of the children’s heart surgery unit in Southampton, which serves his Hampshire constituents. He told the local paper that he would be “pursuing the case”.

Pruning NHS jobs could revive voter anger as coalition MPs had campaigned to save services during the election. Nick Clegg put the future of Kingston Hospital in south-west London at the heart of his campaign, touring the maternity wing with his wife. Last week, the hospital cut 500 jobs.

There is particular concern about the toll in England where the NHS is struggling to cope with a £20bn efficiency drive while being reshaped by the government’s radical, free market proposals for the health service. Despite promising to protect health budgets, Lansley, the health secretary, has secured just 0.1% rises to the NHS budget and is cutting the cash hospitals receive for treating patients.

The regions will also lose out heavily with more than 2,200 jobs going this year in Northern Ireland and another 4,000 forecast to be lost in the next four years. Belfast will lose 620 nurses this year.

Doctors organisations said that the cuts represented a “false economy”. The British Medical Association pointed out that “even cuts to backroom staff impact on clinical workers who have to pick up the administrative burden”.

The Royal College of Nursing said the figures merely confirmed its own worst fears, adding it identified in November that 27,000 NHS posts were to be lost across the UK. “We are constantly monitoring the situation and given the recent spate of job losses across the health service, it seems obvious that this figure is now increasing. We know that many trusts are facing financial difficulties but cutting jobs and services is never the answer,” said Peter Carter, the RCN’s chief executive.

Labour moved quickly to capitalise on the sheer scale of the cuts saying they “call into question the Tories’ handling of the health service”. John Healey, Labour’s shadow health secretary, said: “The government is piling extra pressure on the NHS with its huge, high-cost reorganisation and by breaking the prime minister’s pledge to give the NHS a real rise in funding next year. The Tory-led government has asked parliament to vote an extra £1.8bn to pay for its big reorganisation of NHS management. This is wasted money which could pay for almost 15,000 nurses for the next three years.”

Brendan Barber, the TUC’s general secretary, which backs False Economy, said: “False Economy’s new research on NHS job cuts gives the lie to government claims that the NHS was safe in their hands. Not only are they reorganising the NHS in a way that strips out many of its founding principles, but also insisting on immediate cuts that will certainly harm frontline services.”

However, a source close to the health secretary dismissed the criticism saying that under the coalition – but before the cutbacks – doctor numbers rose by more than 2,000. “The unions are scaremongering. In reality, the government promised to reduce NHS bureaucracy and plough this money straight back into patient care, and that is exactly what we are delivering.”

2 thoughts on “NHS to Slash 50,000 Jobs, Including Doctors And Nurses”