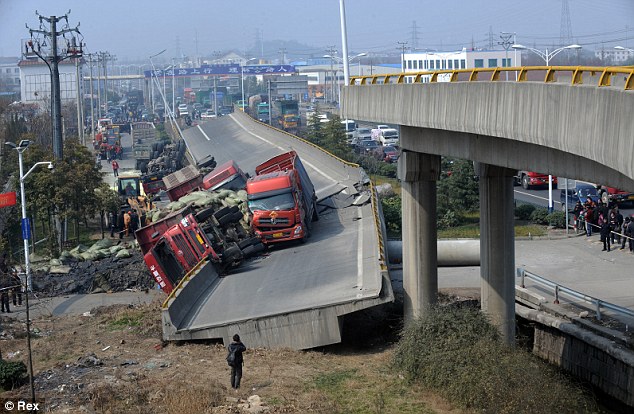 Miracle: Luckily, no one is believed to have been beneath the road when it collapsed

Four lorry drivers are lucky to be alive today after they survived this road collapse.

Their trucks plunged to the ground and overturned when an overpass ramp collapsed in Shangyu, in east China’s Zhejiang Province, on Monday.

The slip road fell 23 feet at about 3am in the morning, as the drivers switched from a local motorway to a national highway.

The truck drivers were taken to hospital.

Three of the drivers received minor injuries, but the condition of the fourth has not yet been released.

Luckily, no one was believed to be beneath the road when it collapsed. If anyone had been they almost certainly would have died.

Traffic on the main section of National Highway 104 has resumed and city authorities are investigating the collapse.