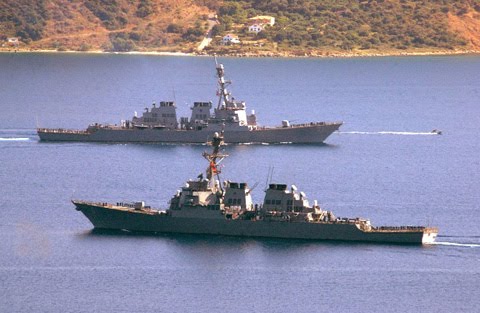 Feb. 22 (Bloomberg) — Iranian warships sailed through the Suez Canal to reach the Mediterranean Sea for the first time since 1979 as Israel stressed its objection to their voyage to Syria.

Crude reached its highest level in a week in New York on Feb. 18 as the heightening of tensions between Iran and Israel because of the trip increased concerns over instability in the region. Iran is the second-biggest producer, after Saudi Arabia, in the Organization of the Petroleum Exporting Countries. Oil jumped to the highest in more than two years in New York today as Libyan unrest stoked further concern over supplies.

“The transit of the Iranian boats is part of Iran’s full- out struggle for hegemony and control of the Middle East,” Israeli Vice Prime Minister Silvan Shalom said today at a conference in Eilat, according to an e-mailed statement from his office.

Shalom’s comments followed Israeli Foreign Ministry spokesman Yigal Palmor’s depiction of the warships sailing through the canal as “a provocation” that should be “dealt with by the international community.” He said today that he was citing previous comments by Foreign Minister Avigdor Lieberman.
Won’t Risk Attack

“The Iranian warships saga is a significant one but with limited consequence,” Richard Lee, a senior equity analyst at Emirates NBD Asset Management Ltd. in Dubai, said in comments e- mailed today. “It is significant because of the appearance of an emerging tension between Iran and Israel, and it likely to stay as that. I don’t expect this to turn into a full-scale war simply because Iran cannot afford it now.”

Iran rejects international economic sanctions aimed at curbing its nuclear program and has accused the U.S. and Israel of stoking dissent in the Islamic state. Unrest in Iran has been revived in the past week under the influence of Arab revolts.

Israel and the U.S. suspect that Iran’s nuclear program is aimed at producing weapons. Iran says its atomic installations are for generating power. The United Nations has imposed four rounds of sanctions on Iran over its nuclear program.

The vessels, the 1,500-ton patrol frigate Alvand and 33,000-ton supply vessel Khark, are the first Iranian warships to use the waterway since the 1979 Islamic revolution that toppled Iran’s pro-Western monarchy, according to Press TV. Alvand is armed with torpedoes and anti-ship missiles, while Khark has a 250-member crew and can carry three helicopters, the Iranian state-run broadcaster said.
Key Route

The 120-mile (190-kilometer) waterway carries about 2.5 percent of world oil output, according to Goldman Sachs Group Inc., and is a key route for ships carrying Asian consumer goods to Europe.

The U.S. is monitoring the progress of the warships, White House press secretary Jay Carney said Feb. 18. Iran doesn’t show “responsible behavior in the region, which is always a concern to us,” he said.

Prime Minister Benjamin Netanyahu said Feb. 20 that Israel views with “gravity” Iran’s plan to send the vessels through the canal, a move that he said highlights the need to increase his country’s defense budget. Lieberman said on Feb. 16 that Israel wouldn’t “ignore forever” such acts.

The ships will go to Syria, where they will anchor “for a few days” after a trip through the canal that is “routine according to international law,” Iran’s state-run Islamic Republic News Agency said cited the country’s ambassador to Syria, Ahmad Mousavi, as saying.

Egypt said on Feb. 18 that it had approved Iran’s request to send the ships through the canal. According to international law, Egypt can’t forbid any vessel from using the waterway unless that country is at war with Egypt, El Manakhly told Bloomberg Television Feb. 16.