– TV And Computer Monitors Do Manipulate Your Brain: US Patent 6506148 – Nervous System Manipulation By Electromagnetic Fields From Monitors

And 3D images are even more real for the brain. 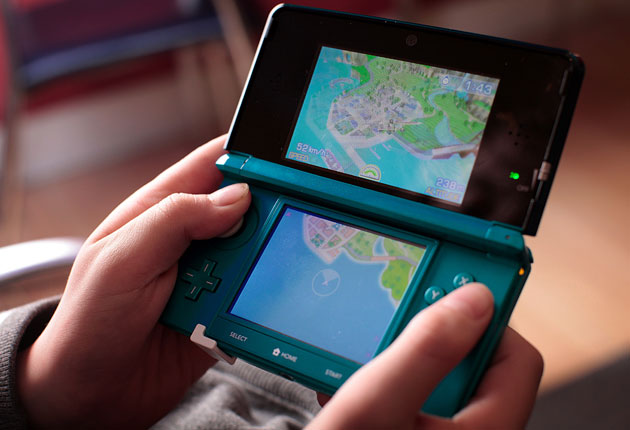 The Nintendo 3DS works by presenting slightly different images to each eye, tricking the brain into seeing depth

It promises unique “eye-popping” entertainment, but what it actually delivers is nausea, sore eyes and dizzying headaches. The Nintendo 3DS, the latest Nintendo DS in 3D, is anticipated to be the handheld console smash of the summer, but health fears threaten to tarnish its launch and have highlighted growing concern about the rapid spread of 3D entertainment.

The handheld games console, which creates 3D images without the need for glasses, goes on sale in Japan this week. Already it carries a list of health warnings, including guidance that the device should not be played in 3D by children under the age of six and that users should “stop playing at once” if their physical condition worsens.

Invited by this paper to test one of the consoles ahead of its launch in Britain next month, Larry Benjamin, vice-president of the Royal College of Ophthalmologists, said, after playing Street Fight IV in 3D mode: “It’s remarkable 3D, but it’s fairly dependent on your position. If you’re just five degrees off, it doesn’t quite work, which is tiring for the eyes… you continually have to readjust to 3D vision and that’s making me feel a bit queasy. I think it’s fair to warn people they may experience eye strain, double vision or difficulty focusing. I think it’d be sensible to do longer-term trials on it.”

The 3D in the new console works without glasses by presenting slightly different images to each eye, tricking the brain into seeing depth. Nintendo advises people to hold the device square on to avoid the 3D slipping in and out, but users say it’s difficult to maintain when playing.

Josh McSmith, aged 13, tried out the new device and after five minutes had to stop. “It started giving me a headache and I felt sick. I wouldn’t recommend it, no, it just hurts my eyes.”

Ophthalmologists in America have reported the phenomenon of “3D headaches” as people leave cinemas with strained eyes. Many 3D TVs now come with health warnings, as the industry waits to see if the format has any lasting impact on health.

Young children are causing the most concern. Steven Nusinowitz, a professor of ophthalmology at the University of California-Los Angeles, said: “The visual system in children is constantly changing and developing. I’d be extremely cautious at throwing 3D at a child with a developing visual system. These are not experiments that can be run on humans, particularly children, without ethical considerations. I don’t know what could happen to a four- or five-year-old. Their system is going to be calibrated differently and it could be thrown off.”

A Nintendo spokesman said: “The advice for Nintendo 3DS is the same as for all gaming, which is to take regular breaks… we are not aware of reports of people having problems. It is possible to adjust the level of 3D on the console allowing each user to select the ideal depth of 3D for them.”

1 thought on “Health Warning For Children Over 3D Games”