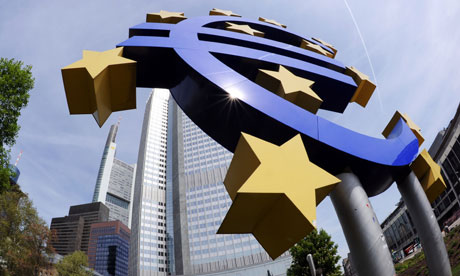 Fears are swirling around Europe’s debt markets that a eurozone bank is in trouble after figures showed one or more lenders had borrowed €16bn (£13.4bn) from the European Central Bank’s emergency overnight cash facility.

The increase in borrowing intensified speculation that one of the eurozone’s many ailing banks was in a worse than expected position and needed to tap cash set aside by the ECB for banks unable to borrow on the open market.

Investors have become increasingly worried that a number of European banks could need rescuing as the continent’s economies slow and bad debts from mortgage arrears get worse.

Spanish and Portuguese banks, many of them saddled with billions of euros of mortgage debt, are considered vulnerable to a slowdown in economic growth. Likewise, some French and German banks have struggled to emerge from the financial crisis.

The ECB gives no breakdown of the borrowing figures and declined to comment when asked for an explanation for the sudden jump in overnight borrowing.

Traders were unsure whether the spike was due to a serious funding issue or whether a bank had simply made an error earlier in the week by not borrowing enough at the ECB’s regular weekly funding handout.

If a bank, or a number of banks, did not get enough funding, and were unable to make up the difference in the open markets, they would be forced to use the ECB’s emergency facility until the next ECB tender came around. The next ECB offering is on Tuesday and any change in bank funding would be evident in figures published early on Thursday.

“As no bank or banking group from any eurozone country is aggressively seeking money in the interbank market at the moment, it is likely that something went wrong at the main refinancing operation,” one trader on the eurozone money market told Reuters.

But he added: “The bank or banking group needs to tap the ECB for the money whether they like it or not – or they are doing that so as not to appear active on the money market and to thereby be stigmatised.”

In recent weeks, the ECB has talked about winding down its emergency facility as bank finances improve. Banks borrowed the lowest amount since June at a tender last week.

UniCredit analyst Luca Cazzulani said: “If the increased use of the marginal borrowing facility is due to new problems in the banking system this would call for an extension of the ECB’s liquidity support.”

A banking source in Italy, speaking on condition of anonymity, told Reuters that the increase in borrowing was a sign that money markets were still not functioning correctly and remained geographically split in the wake of the global financial crisis. The source added the Italian banking system continued to have good access to money markets, while a high-level Spanish financial source said the jump in borrowing was not down to Spanish banks.