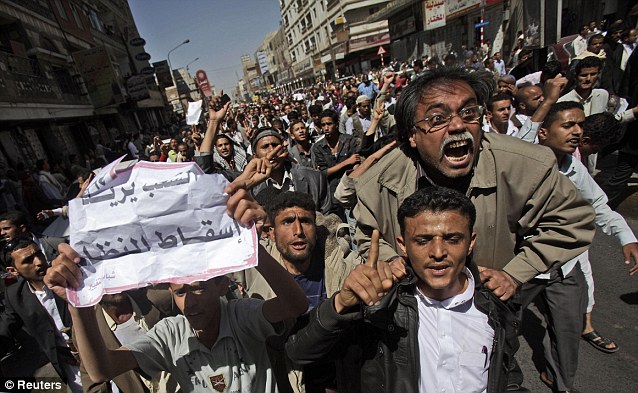 Yemeni riot police shot dead a protester and injured five others on Saturday when they opened fire on thousands marching in the 10th day of unrest rocking the capital Sanaa.

Protesters began marching early in the morning from the University of Sanaa to the Ministry of Justice while chanting, ‘the people want the fall of the regime,’ until they were met by riot police.

A medical official said one man was shot in the neck and killed. He spoke on condition of anonymity because he was not authorized to speak to the press.

It was the 10th straight day of protests in Yemen inspired by uprisings in Egypt and Tunisia, which have killed seven people across the country. Demonstrators are calling for the ouster of President Ali Abdullah Saleh – a key U.S. ally in fighting al-Qaida terrorists – who has ruled the country for 32 years.

Meanwhile residents of Yemen’s port city Aden, where fierce riots have resulted in at least four deaths, said security forces have disappeared from the streets, threatening to plunge the city into chaos.
Residents say groups of men are looting and burning government buildings and there is no sign of police or armed forces.

Saleh is already facing a restless population, with threats from al-Qaida militants who want to oust him, a southern secessionist movement and a sporadic armed rebellion in the north.

To try to quell the new outbursts of dissent, Saleh pledged to meet some of the protesters’ demands and has reached out to tribal chiefs, who are a major base of support for him.

But a key chief from Saleh’s own tribe was critical of his policies and threatened to join the protesters – an apparent attempt to pressure the embattled leader of the world’s poorest Arab country.

For now, most of the protesters are students, educated professionals and activists who used social media sites Facebook and Twitter in summoning people to the streets.

Riot police fired tear gas and shots in the air to disperse the angry crowds inspired by victorious protests in Tunisia and Egypt.

The latest deaths came as clashes flared yesterday in Aden, where at least one of the deaths was that of a demonstrator after cars and a local government building were set ablaze, officials said. The other death was reported in Sana’a.

It was the tenth straight day of protests in Yemen where citizens are demanding democratic reform.
Demonstrators in the Arab world’s poorest country are calling for the oustingof President Ali Abdullah Saleh – a key U.S. ally in fighting al-Qaida terrorists – who has ruled the country for 32 years.

Saleh is already facing a restless population, with threats from al-Qaida militants saying they want to oust him, a southern secessionist movement and an on-and-off armed rebellion in the north.

To try to quell the new outbursts of dissent, Saleh pledged to meet some of the protesters’ demands and has reached out to tribal chiefs, who present a major base of support for him.

But a major chief from Saleh’s own tribe was critical of his policies and threatened to join the protesters – an apparent attempt to put pressure on the embattled leader.

For now, most of the protesters are made up of students, educated professionals and activists who used social media sites Facebook and Twitter in summoning people to the streets for the ‘Friday of Rage’ following noon prayers.

Tens of tens of thousands responded in the capital of Sana’a, the southern port of Aden and the political hotbed of Taiz. Some websites also referred to the day as ‘Friday of the Beginning.’

In a twist, many mosque preachers took a critical tone with the government.

A preacher at the Sana’a University mosque spoke out against torture and beating of demonstrators, telling many protesters who had gathered there: ‘We have been living for 30 years without purpose or hope.’

Imam Jabri Al Yamani admonished the crowd that ‘protests must be peaceful and not scare and harm the people,’ but as demonstrators marched toward the presidential palace afterwards, the scene descended into violence.

Another Sana’a preacher, Imam Abdel Raqib Obad, urged people to join the protests and criticized the security for ‘battling’ the youth.

The crowd, chanting anti-government slogans, was met by a heavy deployment of riot police and hundreds of Saleh supporters, similar to confrontations earlier this week. The pro-and anti-government sides attacked each other with rocks, and the riot police began firing in the air and launching tear gas canisters.

At least four people were hurt seriously enough to be taken away by ambulances.

The demonstrators dispersed to other streets, some of which were blocked by police.

Journalists also came under attack by government supporters. An Associated Press reporter saw men with sticks attack a TV crew, smashing their camera. Other photographers took refuge in a building to avoid the mob.
The U.S. Embassy in Sana’a said it has seen ‘a disturbing rise in the number and violence of attacks against Yemeni citizens’ at peaceful protests.

The statement added that diplomats also saw reports that Yemen government officials ‘were present during these attacks’, which it called ‘contrary to the commitments that President Saleh has made to protect the right of Yemeni citizens to gather peacefully to express their views.’

It urged the government ‘to prevent any further attacks on peaceful demonstrations and to ensure that all Yemenis, both pro- and anti-government, have equal rights to speech and assembly.’

In Taiz, about 270 miles (435 kilometers) south of Sanaa, the call for demonstrations brought out thousands of people, and witnesses said men in a speeding civilian car threw what appeared to be a grenade into a crowd of demonstrators, causing a stampede when it exploded.

At least eight protesters were seriously wounded, and many others were hurt as they fell in the stampede and chaos, said Ghazi al-Samie, a lawyer and activist in Taiz, Yemen’s second-largest city.

In Aden, protesters burned four government cars and a local council building in the Sheik Othman neighborhood. Similar government buildings in the Mansoura and Crater districts were set on fire in the past two days.

A large demonstration also was reported in eastern Hadramawt province, where police fired in the air to disperse protesters.

Saleh, a weak but increasingly important partner for Washington, had pledged not to seek re-election in 2013 or pass power to his son. The promise was seen as an attempt to defuse calls for his dismissal.

Opposition groups said they are suspicious of Saleh’s offer and want concrete proposals for change.

Tribal chief Hussein al-Ahmar, a member of Saleh’s tribe, told a crowd in his home province Thursday that if violence against protesters continued, his tribesmen may come in to the defense of the demonstrators.

The threat, apparently aimed to get more concessions from Saleh, could turn the protests more violent. Al-Ahmar’s tribe, Hashed, is one of the largest and best-armed in Yemen.

‘It is not the armed forces, nor Saleh and his army that protect Sanaa, but the tribes of Hashed” and others, Al-Ahmar told the crowd in Amran province. ‘If the authorities continue to scare the protesters with their thugs, we will have to interfere.’

Yemen has become a main battleground against al-Qaida. The government, which receives millions of dollars in U.S. military aid, has allowed American drone strikes on al-Qaida targets and has stepped up counterterrorism cooperation.

The U.S.-born radical cleric Anwar al-Awlaki, thought to be hiding in Yemen, is believed to have inspired and even plotted or helped coordinate recent attacks on the U.S. Those include the failed December 2009 bombing of a Detroit-bound airliner and the unsuccessful plot to send mail bombs on planes from Yemen to the U.S.

Al-Awlaki also is believed to have inspired the deadly 2009 shooting rampage at Fort Hood, Texas, and had ties to some of the 9/11 hijackers.

Nearly half of Yemen’s population lives below the poverty line of $2 a day and its government is riddled with corruption.

The country also is plagued by shrinking water and oil resources and an inability to feed its people. Poverty and malnutrition are rampant in the country’s rugged hinterland.