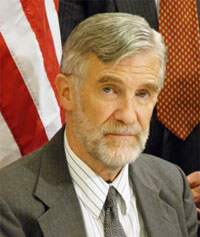 The official position of the US Secretary of State is that countries around the world should respect their citizens’ rights to free speech, free expression and free assembly — and that’s precisely what Sec. Hillary Clinton said during a Tuesday speech at George Washington University.

Unfortunately, as she spoke, not 15 feet in front of her, a series of events unfolded that utterly undermined the message.

Former CIA agent Ray McGovern, an outspoken critic of US foreign policy, stood silently in the auditorium’s center aisle, and turned his back on Clinton.

For his symbolic and otherwise non-disruptive protest, he was quickly accosted by security agents. As they struggled to pull him out of the room, a CNN news camera caught the tail end of the ordeal.

“SO THIS IS AMERICA?!? This is America? Who are you?” the 71-year-old McGovern shouted as he was hauled away.

He claims to have been “bloodied” and “bruised” (photo) by one man in uniform and an unnamed, plain-clothes security worker.

Clinton didn’t even skip a beat.

McGovern was being represented by the Partnership for Civil Justice Fund (PCJF).

“It is the ultimate definition of lip service that Secretary of State Clinton would be trumpeting the U.S. government’s supposed concerns for free speech rights and this man would be simultaneously brutalized and arrested for engaging in a peaceful act of dissent at her speech,” a spokeswoman for the group said in a published statement.

US officials came under similar rhetorical fire in December, when they announced plans to host “World Press Freedom Day.” The announcement was made on the same day that Sen. Joesph Lieberman (I-CT) declared that WikiLeaks founder Julian Assange should be prosecuted for espionage over his role in the release of US diplomatic cables.

“When people die because we have hypocrites at the top of our government, that compels me to make a statement in whatever way I can,” McGovern later told Rob Kall, who posted the remarks to Op Ed News. “It was not the theme of her speech that I was protesting. It was her war policies and support of Mubarak.”